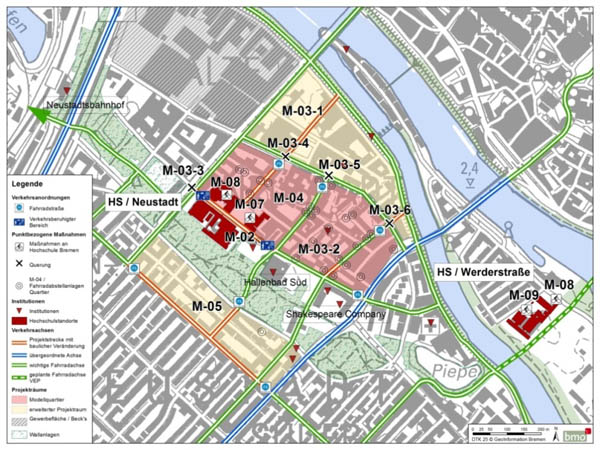 Further to our post in December, it has been announced this week that Bremen has been successful in its bid for federal funding towards a budget of €2.4m (2.396.650m €) for the proposed Bicycle Neighbourhood in the Neustadt district of the city.

By mid-2019 the project will have created an area around Bremen’s Hochschule (University of Applied Sciences) in which the bike will have priority, through the creation of new cycle streets, substantial new cycle parking, cycle hire stations, and new connections with the wider cycle network. The federal contribution comes from the Federal Government Environment Ministry, not the Transport Ministry, under a scheme designed to cut harmful greenhouse gas emissions. Specific environmental aims therefore feature, related to a rise in cycling’s modal share. As the document explains:

“It is a declared goal of the city of Bremen to achieve a reduction of greenhouse gas emissions in road traffic by increasing the modal share of cycling from 25% to 30%. In the planned cycle model quarter, the target is to raise the current 40% share to more than 50%”.

Where the 40% figure comes from is not clear. A number of measures will be in place to assess the impact of the project, though this will not be as easy as some might believe. For example, any measurable change will be difficult to spot using the nearby cycle counters on Wilhelm-Kaisen-Brücke, where numbers have both risen and fallen by over 15% since 2012 using year-on-year comparisons.

The project is being hailed by its backers as a first-ever “cycle zone” in Germany. And its aims are laudable. However, this will not be an area that is car-free. Rat-runs through this quarter will be still possible even for a special area in front of the Uni, where a big chunk of the money (€760,000) will be invested to create a so-called Begegnungszone.

A hoped-for side effect of the project will be to eliminate illegal car parking in the area, which has reached chronic proportions in some streets, blocking pavements and preventing access for emergency vehicles. New car-sharing stations are planned as part of the project mix, as well as better pedestrian crossings of main roads around the area. But car parking will not be discouraged:

“Despite the conversion of the area into a Model Cycle Neighbourhood, no legal parking spaces for motorised traffic will be lost”.

The interesting issue here, of course, is illegal parking. Why do we need federal tax money to clear illegally parked cars from Bremen’s streets when a brief policing campaign would do the trick? And of course the problem of illegal parking is not restricted to this small area of the Neustadt.

The pilot scheme’s main feature is arguably its heavy reliance on the somewhat diluted Bremen Cycle Street model that we have already examined in some considerable detail. In contrast to the generous financing of the above mentioned “Begegnungszone” those Cycle Streets within the Model Quarter zone are allocated a mere 24,000 Euros. Presumably this will simply include signposting and paint. These streets are all residential side streets, with low levels of through traffic anyway. Similar streets throughout Bremen have historically been traffic-calmed by other measures, complex one-way systems for motorised traffic being the most prevalent. Observe such streets today, for example throughout the city’s Viertel area, and you will see pedestrians walking down the middle of the road, and in most cases motor vehicles driving very slowly. Cyclists can use these streets both ways, creating de facto priority over motor traffic. Without taking the step of making the area car-free, the choice of Cycle Street is in reality a fashion choice.

Lahnstrasse to the south is another case. A classic collector road with medium traffic, it is allocated €420,000. This street currently has a mix of degraded cycle paths, on road mandatory cycle lanes, plus plenty of illegal parking. Footpaths are at times adequate, at times too narrow. It has the potential for much more on-street living culture. Conversion to a cycle street in this case has been welcomed by local citizens’ organisations, who have been waiting for years now for something to be done.

However, the weakness of the Bremen version of Cycle Streets when applied to such medium traffic streets remains. And compared to cities like Oslo, where the centre will be entirely car-free by 2020 and consequent greenhouse gas emissions cut by 50%, Bremen’s efforts appear limited.

This project has been supported and fought for by many activists in the Neustadt quarter. Naturally enough, the city’s big hitters fronted this week’s announcement of funding success. But it has to be stressed here that really this project seems to be more bottom-up than top-down.

The current obsession with Cycle Streets as a traffic-calming tool may well be blinding planners and politicians from other, more productive measures. But despite such limitations – and the old-fashioned opposition of some publications – it will be interesting to see whether such a concentrated effort in one area, built around an institution that is already very cycle-friendly, can create a strong enough street culture in the area that motorised traffic declines without actual prohibition. This is, after all, the Bremen way. Co-habitation between cycle city and car city.