Albrechtstraße: An old and comfy cycle street in Bremen

Bremen released a comprehensive transport plan in 2014: Verkehrsentwicklungsplan 2025. One of many aims is to improve cycling and cycling infrastructure. In Germany  “Verkehrswende”, i.e. a fundamental change of the transport world, is a big issue. Accordingly you would think the Bremen transport plan, VEP 2025, takes this concept seriously. So why  are cycle streets so feebly implemented? There are a number of theories. Here are 2 for starters.

* The Bremen administration is cost-driven, simply looking for a cheap way of avoiding the upgrade of the 700km of elderly cycle paths, whilst appearing cycling-friendly. Interestingly, both senators involved – transport and finance – are from the very party you would think would have the strongest interest in effective Verkehrswende policies, the Greens.

* The policy is ideology-driven. This theory suggests that successive Transport Senators’ advisors are ideologues of the mantra that says on-road cycling is objectively safer. This translates into Cycle Streets that  freely mix cyclists with motorised traffic. This position became highly popular in Germany some 20 years ago, when cycle campaigners fought to change the law making the use of cycle paths compulsory. The campaign was led by the ADFC – German Cycling Advocates’ Association – who argued for “objective” safety, blaming the use of cycle paths to be objectively more dangerous than cycling on the road.

However, the ADFC has now changed its paradigm, with its top dogs recognising that subjective and objective safety need to be combined, people need to feel comfortable with the infrastructure, if we want them to get on bikes. Further the ADFC found that in every cycling city with a decent modal share of cycling, there exists a coherent network of cycle paths – regardless of the quality. Examples are – aha! – Bremen, Münster and Oldenburg. Is the international, and indeed national, debate about subjective safety, or even sustainable safety, reaching the ears of decision makers?

So what should effective and attractive Cycle Streets look like? Here we make some final recommendations:

If motorised traffic is permitted, the following rules should be applied, in addition to the provisions of the Bremen Guidelines:

Only local traffic should be allowed to use Cycle Streets.

Cycle Streets should not be used as rat-runs for non-resident through traffic. Simple traffic pillars In the middle of the road can prevent this. Meanwhile, residents and suppliers are still able to get to their homes or delivery destinations.

Delivery vehicles over 3.5 t should be avoided in Cycle Streets as far as possible. It is worth researching whether delivery time slots can be introduced, for example 10am to 12noon in a way that avoids peak cycle traffic.

Introduce parking space management in a broader sense in order to prevent the search for parking.

An overtaking ban should apply to motor vehicles, as is the case in Belgium.

As a 30 km/h speed limit seems to invite drivers to speed up to 50 km/h, the limit should be 20 km/h. And it should be monitored.

Design: Do not set straight streets, but rather put in sightblocks or swings to slow the car traffic, colour the road red to make the road visible to all. Also speed bumpers should be built at every junction and the general entry and exit of the street.

Cycle Streets should be single-lane. Wide streets like Wachmannstraße and Humboldtstraße can lead to excessive speed and dangerous attempts at overtaking

Set up advanced stop lines at the exit of cycle lanes and wide supply lines so that bicycles are not forced to overtake waiting cars on the left: Minimum width 1.30m for the supply strips. (Generally speaking, as a cyclist to wait in the middle of the road amid car traffic, feels not very comfortable, you don’t want to breathe in the emissions.)

Prohibition of entry and transit, as well as general behavior, especially of motor vehicles (speed, overtaking, thrusting, horns, etc.), must be consistently monitored (police), recorded and evaluated (administration); only then regular reports about the success of Cycle Streets can be developed and published. 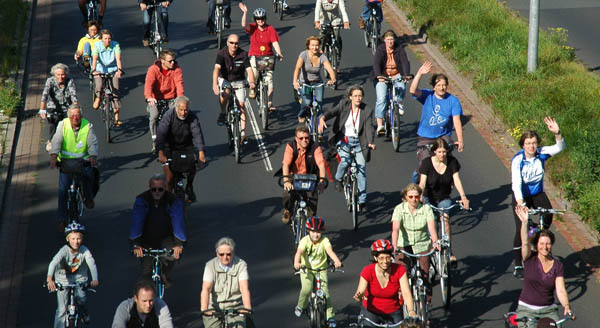 “Bremen is a cycling city with a long standing tradition. For decades we have built cycle paths. (…) Even when the car conquered our cities people in Bremen continued to cycle.”

Rather than building on this tradition by introducing Cycle Streets that offer great advantages to cyclists, we too often get the light touch variety. The so-called Verkehrswende will, in Bremen at least, remain no more than a distant dream.

29 thoughts on “Cycle Streets That Inspire?”