In most cities parking is the cause of hot debate. Residents around the world set up campaigns about it, as our streets become choked with too many  unlawfully parked cars, high traffic loads due to motorists searching for a vacant space, safety worries due to blocked access for emergency vehicles, pavement parking, parking on crossroads, 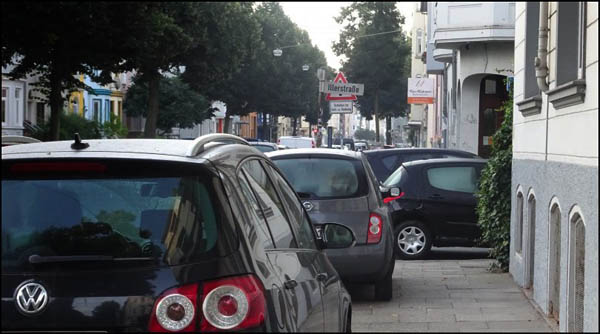 hazardous situations for the least protected people – pedestrians- and among them those who most depend on a good quality of public space: children, people with baby carriages, people with and without walking aids. And these are just some of the many criticisms expressed.

For Bremen, the Bremen Traffic Development Plan (2025) deals with parked vehicles in the related “Action Plan G” (see page 169) and summarizes in a very clear way: “Due to the  precarious situation with regard to lost public space for other road users, caused by parked vehicles, implementation is to be assessed as a priority. Regardless of the financial conditions, the measures will be initiated at an early stage and operated over the entire period of the review “.

The Advisory Council of Neustadt (Bremen) has now taken up this issue following a large number of resident requests to become active and they invite, on the basis of §8, local law on advisory and local authorities, guests from politics, the local administration, and residents to this event.

1 thought on “The Parking Problem”