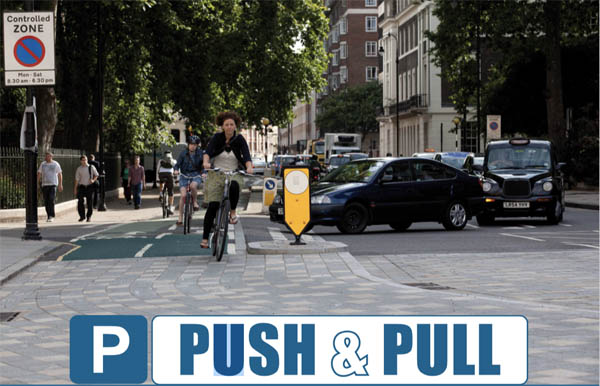 With the recent publication of proposals for comprehensive parking management by Bremen’s Transport Transition coalition, there’s been considerable discussion in the city’s media about the problem of illegal parking. Little has been said about its direct impact on cycling in Bremen, despite the publication’s central point that proper management of car parking is a means to releasing road space for walking and cycling.

This reluctance to link the two issues is surprising, given worldwide recognition that it is the key to transforming car-dominated cities into cycling cities. We have already documented Oslo’s efforts to reduce car parking in and around the city centre, a deliberate policy that is creating space for new cycleways. Amsterdam has been funding new cycling infrastructure via a central mobility fund since 1991. The fund draws its income from parking fees.

But Bremen is slow to catch on to this debate. Why? I would suggest 3 reasons.

The first reason must surely be the dominance of motorised transport in the thinking of so many departments in the city’s administration. Anything that threatens the freeflow of motorised traffic, would appear to be taboo, including the desire to maximize car parking. Thus, the ASV (Amt für Straßen und Verkehr) repeatedly turned down a citizens’ initiative to create a temporary playstreet  in the district of Findorff. It pleaded “lack of resources” in response to local residents’ desire to calm a dangerous junction. Yet when residents in the district of Neustadt decided to do something about a junction themselves, within a week the ASV had found the resources to undo all the work, and send the bill to the citizens concerned. The famous tale of the Stephanibrücke, whereby the bridge’s structural problems are to be solved not by reducing heavy motor traffic but by reducing cycling space, sums up the approach of Bremen’s ASV.

The police are happy to back up this approach. Whilst a blind eye is regularly turned towards illegal parking, despite regular wake-up calls from citizens, they are quick to tow away legally parked cars that hinder the increase in parking space afforded by illegality.

The second is Bremen’s recent love affair with on-road cycling. The past two decades have seen a stagnating modal share for cycling in the city, as the ADFC fought to remove barriers to cyclists’ rights to on-road cycling, and the administration tagged along by promoting the idea. Bremen’s “lite” version of a Cycle Street celebrates this idea, and is happily supported by the traditional petrol heads of the CDU and the ASV as it doesn’t threaten car parking. Indeed it helps it, as old cycle paths get taken over by parked cars.

3. Fear of a motorist backlash

The third is the fear of the backlash. Research suggests that most citizens like the idea of fewer cars in their town or city, and more space being allocated to cycling and walking. But when it comes to the micro-detail of specific parking spaces in specific streets, some local car owners are quick to defend what they have. What this suggests is that a strategy is required to help citizens focus more on the collective benefits, and less on the individual sacrifices.

Sevilla just did it

This is exactly what Sevilla did 10 years ago. In order to build its cycle network, an idea popular at the community level, the city needed to remove 5,000 on-street parking spaces. But because they were committed to fulfilling the completion of the network, they refused to get drawn into the debate about parking spaces. The results are impressive for a city that started from next to nothing.

How Seville Got Its Bicycle Network from STREETFILMS on Vimeo.

There are certainly positive signs. Even without an understanding of the link to cycle infrastructure, illegal parking is slowly becoming a red line issue, and there is political pressure mounting on the main parties in advance of the May 2019 state election.

On-road cycling in Bremen is looking distinctly last century. Protected cycle lanes has appeared in the language of Bremen’s cycling community in a way vehicular cycling never did. As a result, the cycle street-lite model is starting to look shabby, even to its early supporters. Criticisms have grown within the Green Party, where there is a recognition that something better needs to be done for the next legislative period. A new initiative, Platz Da! (there’s space!), is explicitly calling for more space for cycling infrastructure, and has joined forces with the Transport Transition coalition.

But to contain the NIMBY backlash that inevitably follows a reduction in car parking space, Bremen needs the sort of political leadership that was evident in Sevilla. Whether such leadership will emerge before next year’s elections is anybody’s guess.