One of the best examples of consistent parking management is the city of Amsterdam. The principle is simple. The closer you park to the centre the more you pay. Amsterdam’s parking regime covers an area that, as far as population is concerned, is nearly as big as Bremen. 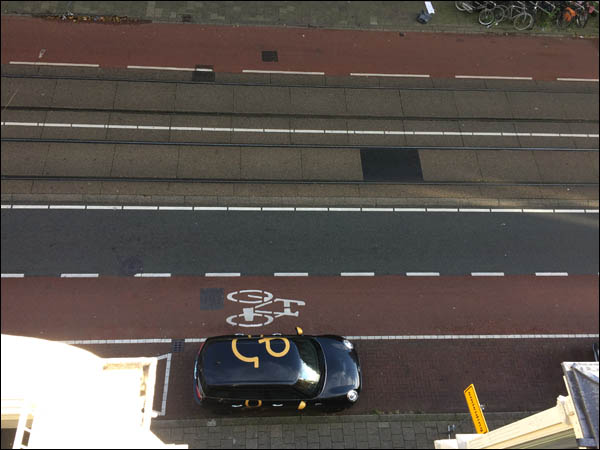 Marjolein de Lange describes the Amsterdam policy in her study “The Amsterdam Mobility Fund, Report September 2014 für die TUB Trafikutredningsbyrån AB“. 156.000 of 250.000 public parking spaces in Amsterdam fall under the parking management scheme. 485.000 inhabitants live in this area, 292.000 people go to work here. Visitors pay in the centre per day up to €55, or € 5-8 per hour. Inhabitants who want to buy the right to park their cars near their houses pay between €24 per year in Noord and €440 per year in some parts of Centrum. 1

Demand is exceeding supply. There are waiting lists, with some inhabitants waiting up to 4 years for a concession. Consequently only 28% of all inhabitants over 18 own a car.

Amsterdam has had parking fees since 1960, but since 1991 the income isn’t just paid into the central state budget but goes to the city of Amsterdam, and Amsterdam spends the money via a designated mobility fund. 2 In 2012 Amsterdam achieved a total income of €160m from parking fees. 38% are spent on management costs, whilst 39% goes to mobility funds of the seven outskirts and 23% to the city centre. The majority funds measures for pedestrians, bicycles and public transport. 3

Parallel to these measures, the modal share of car driving fell in 20 years from 39 to 31%, whilst cycling’s share rose from 25% in 1970 to 38% in 2008. „All in all, higher parking fees, less on-street parking, better networks for public transport and bicycles, car limiting circulation and more P+R places near the ring road have led to 30% reduction of car use in the city centre (district Centrum) in the last 20 years. Most of that reduced car traffic was replaced by cycling. At the same time, road safety improved and the city centre remained an attractive area for commerce and tourists.”  4

No attack on car drivers

What Amsterdam pursues is a more efficient and socially just distribution of public space. Their policies are not designed to simply attack car drivers. Rather, the intention is much broader : „By making car parking expensive, and at the same time offering good alternatives, more people will choose to come by bike, public transport or Park+Ride. This prevents congestion and thus allows cars that really need to be there to effectively reach their destination. The revenue of paid parking invested in alternatives for urban car traffic is well spent.” 7

– A new tunnel for cyclists and pedestrians under central station, costs about €10m., opening in 2015

– A new connection crossing the Noordhollands kanaal, costs about €7m., opened in 2013

– Exploitation of the ferries crossing de river IJ, about €7m./year

– Contributions to the construction of several fast PT lines

– The costs of new Park+Ride, €13,6m., are paid from a different source than the mobility fund” ↩

3 thoughts on “Carrot and Stick in Amsterdam”