A major step forward for a Transport Transition has been taken in Bremen, with the release of a first joint policy document by city’s the 4 major pro-transition NGOs.

BUND (Friends of the Earth), VCD (German Transport Club), ADFC (German Cycling Campaign) and FussEV (pro-walking) release today their joint proposals for a managed reduction in car parking in the city. The full paper (in German), which can be downloaded here, makes clear its opposition to the lax attitude towards illegal parking taken hitherto by Bremen’s authorities. It states, “Our public space belongs to all citizens of the city. It is much too precious for a parking lot…Illegal parking (on green areas, on pavements and cycleways, at junctions and crossings)..(must be).. consistently punished.”.

But the paper goes farther: 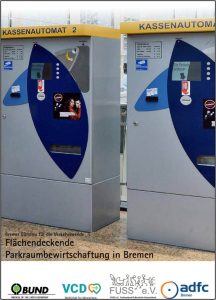 There are also proposals for a pilot residents’ parking scheme, and for the expansion of pavements and cycleways, along the lines of Oslo, as car parking space is reduced. Such expansion, as well as the development of new green spaces in the city, will be funded by the fees gleaned from managed car parking.

The plans are sure to meet with opposition from the car-centric Transport Office, the ASV, as well as their pals in the political organisations of the right and centre. The response from the Greens and Die Linke will be interesting. Equally fascinating will be the response of the Head of Transport, Gunnar Polzin. Last year’s local TV news series on cycling included an interview in which he said quite clearly that Bremen’s problem for pavements and cycleways was a lack of road space. This document sets out one clear solution.