In our article on pavement parking from January 2021, we drew attention to a lawsuit pending at the Bremen Administrative Court against illegal pavement parking. Now there is a judgement: it was published on 22.2.22 and, among other things, upholds the plaintiffs’ claim that parking on the pavement – unless authorised by signage – is illegal, and that

END_OF_DOCUMENT_TOKEN_TO_BE_REPLACED

The city of Bremen is facing a major challenge. It is obliged to design traffic space in an inclusive way, enabling equal participation of all road users and modes of transport. This follows from the UN Convention on the Rights of Persons with Disabilities (UNCRPD), which has been incorporated into federal and Bremen laws (see part 1).

END_OF_DOCUMENT_TOKEN_TO_BE_REPLACED

There is hardly an issue in Bremen that is as heated as the parking of cars in residential areas. Questions like these arise: Who does resident parking help? Is parking on pavements permissible? And if so, under what conditions? What rights do pedestrians have? The debate is characterised by assumptions and unsubstantiated claims on the part of both proponents and opponents of a sustainable traffic turnaround. Reason enough to take a look at the binding provisions of road and traffic law in a series of articles on Bremenize. END_OF_DOCUMENT_TOKEN_TO_BE_REPLACED

Public space is always a scarce commodity in cities that have grown over time without central planning.  Ever more, and ever bigger, vehicles are competing for the same amount of space.  At the same time,  private automobiles are continuing to push other modes of transport out of this public space.  Currently, political as well as legal resistance to this situation is growing, supported by environmental organisations such as BUND, NABU, citizens‘ and neighbourhood initiatives, and transport organisations such as ADFC, VCD; Fuss e.V., Forum for Transportation Transformation („Forum Verkehrswende“), Autofreier Stadttraum („Auto Free City Space/City Dreams“) and Coalition for Transportation Transformation (“Bündnis Verkehrswende“).  In addition, many citizens have filed suit against the city-state for its lack of action against vehicles parked illegally on sidewalks.  This problem is further complicated by electric scooters parked on sidewalks  In the summer of 2020, a visually impaired man was seriously injured in Bremen when he tripped over an electric scooter. He has  filed suit against the city-state for not protecting him from injury. 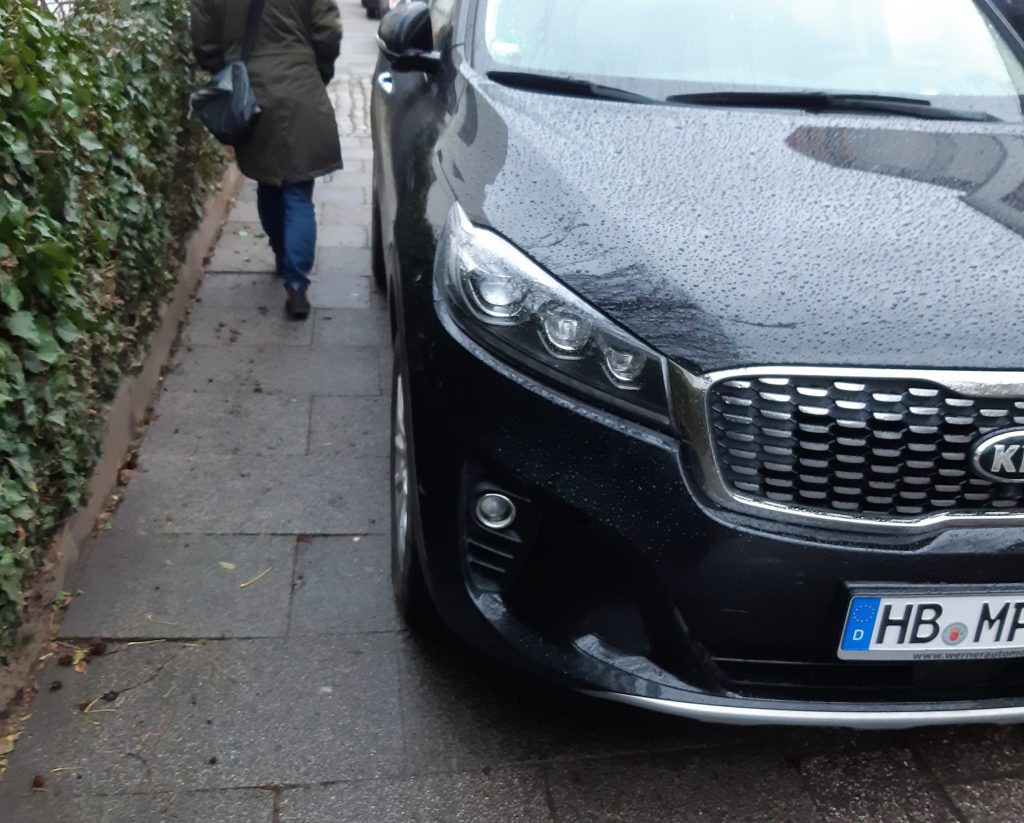 Parking on the sidewalk in Mindener Strasse in Peterswerder in Bremen (foto: Olaf Dilling)