Bremen has a long history of developing tools that have been proven to encourage and enable more people to cycle. The first German cycle path was built here in 1897, cycle streets were invented in Bremen in the 1970s, as was contra-flow cycling on one-way streets. More recently, cycle neighbourhoods have been developed, and mandatory bike lanes built.

But there is one “tool” that has proved to be particularly unhelpful. In Bremen, it gets used yet is largely unknown. In the wider world it is recognised as a damaging idea that has set back a number of countries by decades. It is called vehicular cycling (VC).What Is Vehicular Cycling?

A definition of Vehicular Cycling is provided by the Wikipedia entry of that name:

“the practice of riding bicycles on roads in a manner that is in accordance with the principles for driving in traffic, and in a way that places responsibility for safety on the individual“.

In practice, this means advocating the mixing of cyclists with other vehicles on the road, rather than separating them by constructing cycleways. Cyclists learn to ride their bikes as if it was any other on-road vehicle. Cycle training is therefore regarded as the key to enabling vehicular cycling.

Vehicular cycling became the go-to concept for cycling campaigners in the UK and USA in the 20th century.

In the UK, the Cyclists’ Touring Club (CTC) ran a campaign against separated cycleways in the 1930s, arguing that :

“the provision of cycle paths at the side of any of the main roads would not be with the object of giving cyclists a good path on which to ride, but to remove them from the road in the interests of motorists”.

The idea of separation was seen as a form of surrender to motorists, and was widely lampooned by cycling advocates.

The phrase vehicular cycling first appeared in the USA in 1976, in the first edition of John Forester’s Effective Cycling manual. Here he wrote :

“Cyclists fare best when they act and are treated as drivers of vehicles”.

Forester was a keen cyclist. In 1971 he became a cycling activist when he was fined for cycling on the road instead of a section of pavement in his home city of Palo Alto that had a compulsory cycleway. He fought and overturned his fine, and began to campaign for the right to cycle on all roads in the United States. This inevitably led him to the principle cycling organisation, the League of American Bicyclists. They enthusiastically embraced many of John Forester’s ideas. Indeed, they adopted Forester’s cycling education programme, Effective Cycling. 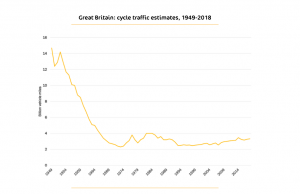 But by the 1990s, activists in both countries realised that cycling was dying as a form of transport. Modal share had declined to less than 1% in both countries. Clearly the idea of mixing with an ever-increasing number of motor vehicles did not appeal. Today both countries are doing “catch up” with countries like Denmark and the Netherlands, who have been building dedicated cycling infrastructure since the 1970s. London is building its Cycle Superhighways, New York its Protected Bicycle Lanes. Both are having an impressive effect on cycling’s popularity. 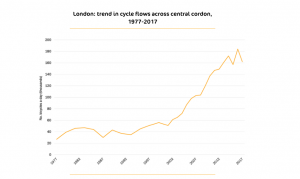 Why is vehicular cycling an important concept for Bremen?

In both the UK and the USA, vehicular cycling advocacy was part of a push to allow cyclists to use the road infrastructure, at a time when cycleways were seen as potentially compulsory.  Bremen’s recent history is not unlike this story, albeit from a different starting point. In the 1990s, Bremen already had a substantial network of separated cycleways, and a cycling modal share of 25%. This was when the ADFC began its campaign against Radwegebenutzungspflicht , or compulsory cycle paths. The campaign was led by experienced and relatively fast cyclists who felt comfortable mixing with motorised traffic. The result has been the elimination of Radwegebenutzungspflicht on most of Bremen’s roads.

In itself, this is not a problem. Experienced cyclists, and particularly working cyclists like couriers, often wish to get to their destinations quicker, and use the road where this saves time. But Bremen’s Transport Plan itself (see page 68) admits that the vast majority of cyclists prefer the safety and relative tranquility of cycleways to mixing with motorised traffic. The problem in Bremen is that this enthusiasm on the part of some cycling advocates for on-road cycling has now become an apparent “solution” to the problem of deteriorating and over-parked cycleways. But the term “on road cycling”, is used in Bremen to denote a multitude of ideas.

For example, the Greens, in their 2013 cycling master plan, Besser Bewegtes Bremen, wrote :

Cycling should share road space with car traffic and not with pedestrians.

Yet in the very next sentence they said :

We suggest that the cycle path on the Herdentorsteinweg towards the city centre be shifted to the road and a car lane be rededicated.

In other words, NOT sharing with car traffic.

In nearly 20 years of cycle campaigning I have never experienced the degree of contradiction amongst activists as I see in Bremen. For example, I often hear the argument that a bicycle is a “vehicle” and therefore “belongs” on the road. But ask what this means in practice, and I find it means different things to different people – full mixing of traffic, the installation of advisory bike lanes, or even mandatory bike lanes. Indeed for some it means protected bike lanes.

Some on-road advocates argue that they are simply following Germany’s Highway Code, the StVO, which states bluntly in § 2 that vehicles must use the road. Yet motorised wheelchairs have been legally defined as vehicles in Germany, but not children on bicycles, who should be handled as if they were pedestrians. And of course the country’s Radwegebenutzungspflicht expressly forbids cyclists from using certain roads. To simplify the argument about cycling’s place in this way is clearly unhelpful.

The problem arises when a select group of advocates argue that others should follow them on to the road on the basis of their personal experience only. I call this subjective advocacy. Such on-road advocates argue that “they feel fine” riding in mixed traffic. When confronted with others who do not, they are dismissed with the mantra that, whatever you feel, the road is safer, “objective safety”. We have demonstrated elsewhere that the German school of on-road objective safety is riddled with mistakes. But it is nevertheless used to justify the removal of existing, separated infrastructure.

The only way Bremen can move forward is by developing policies on the basis of the wider population’s experiences, feelings and attitudes to cycling in different conditions – what I call objective advocacy. Fortunately, such a body of work is already available – the four types of cyclist. Originating in Portland, USA, this analysis is now a key aspect of ADFC thinking nationally, but has yet to surface in Bremen.

The 2018 ADFC publication So Geht Verkehrswende explains how Portland, in response to the failure of vehicular cycling advocacy to increase cycling numbers, closely studied the behaviour of cyclists and non-cyclists. The city’s cycling coordinator Roger Geller came up with four types of cyclist – strong and fearless (0.5% of city dwellers), enthusiastic and convinced (6.5%), interested but worried (60%), and no way, no how (33%). Thus to raise cycling’s modal share, that third group needed to be catered for.

It would be interesting to conduct a similar, much needed, study in Bremen. No doubt the figures would vary in a city where 25% of all trips are done on bicycles as the main means of transport. But the principle remains the same. Enthusiastic and convinced cyclists, very often the very people who are shaping cycling policy, need to look at the needs of others, not themselves, if they want to increase cycling’s modal share. Moreover, the various types of cycling infrastructure, from separated cycleways to mixing with motor traffic, need to be better categorised according to traffic conditions in our various streets. This is all laid out in So Geht Verkehrswende.

From the majority of potential cyclists’ perspective, there is a hierarchy of infrastructure quality, attractiveness and comfort. With separated cycleways at the top, and mixing with motor traffic at the bottom. The busier the street, or the faster the motor traffic, the more important it is to offer cyclists better quality infrastructure. Crucially for Bremen, removing cycleways in exchange for any kind of on-road offer, very often means a reduction in attractiveness for the majority of cyclists.

There is a way, of course, in which moving cyclists on to a road can make sense – when effective measures are taken in parallel to reduce the amount and speed of motor traffic. Transforming a busy street with fast-moving cars to a quiet residential street by, for example, using a modal filter to exclude all through motor traffic, is a valid way to make on-street cycling more attractive.

Use the Vehicular Cycling Test

But with all these variables in play a key measure that can be used is the vehicular cycling test:

In fact, there are already clear examples in Bremen of what vehicular cycling means. Just look at the problems in Pappelstrasse, for example, a street with a 30kph speed limit in the Neustadt district.

It took the USA’s cycling advocates 30 years to change direction. John Forester, for decades a respected cycling activist with the League of American Bicyclists, finally lost an internal election by a 2 to 1 margin in 2006. The UK equivalent John Franklin is still influencing official policy with his book and education programme Cyclecraft . But amongst activists he has provoked anger, and there is a groundswell of support for separated cycling infrastructure.

This debate is bubbling under the surface in Bremen. The decision to remove cycle paths and convert Humboldtstrasse into a Cycle Street – lite is being reassessed in the light of complaints about car-cycle mixing. Proposals to remove cycle paths on Busestrasse have split cycling advocates. And of course there is the controversy over plans for the busy Martinistrasse in the city centre. Leaked details show the current four-lane road with cycleways and footpaths alongside, transformed into a two-lane road, no cycleway, and a wide pavement. The only hint at safer cycling conditions is a 30kph speed limit, something that in practice is proving to be less than sufficient. It is precisely such situations that require the vehicular cycling test.

Bremen’s transport policy debate, like most cities, is now taking place within the context of a climate emergency. The urgent short-term need is to implement measures that move people from polluting modes of transport to environmentally-friendly modes like cycling and walking. If Bremen is to achieve anything like this transport transition, vehicular cycling needs to be better understood. Its oblivious promotion in Bremen has had a negative effect on levels of cycling. As we have seen, there are much better tools in the toolbox.