*A big thanks to the wonderful musician Fred Frith for permission to use Sparrow Song in this short film.

Over the three years or so since we’ve been posting, a background debate has been continuously rearing its head. How, and why, did Bremen become a city with 25% modal share for cycling? Key to trying to answer this question is a good, reliable source of data that can show historical changes over a long enough period of time.

Surprisingly for a cycling city, there is little documented history dedicated to cycling. Even the massive post-1945 history work, Geschichte der Freien Hansestadt Bremen by Barfuß, Müller and Tilgner fails to specifically mention cycling at all. When we first visited the Bremen State Archive to research our first posts about Bremen’s early cycling history  and the first years of cycling in Bremen, we came across a few historical publications that gave, often unconfirmed, snapshots of cycling’s place in Bremen’s traffic mix over time.

One article that attempts such a history appears in the 1987 book Verkehr in Bremen, edited by Hartmut Roder. The article Radfahren in Bremen (Thomas Froitzheim & Arne Lüers) attempts a history of cycling up to that decade, though there are no references cited to back up the, often controversial, figures for cycling’s modal share.

Did cycling decline drastically in Bremen after World War 2? Froitzheim & Lüers reckoned so, quoting a modal share of 10.7% in 1961 and just 5.3% in 1970. We asked the authors where they got these figures, but unfortunately they could not explain their exact sources.

A more recent source of data is the European Platform on Mobility Management. This document’s modal split data from 508 cities across Europe, including Bremen. The figures appear to be sourced from Socialdata. According to EPOMM, cycling’s modal share in Bremen in 1976 was 16%, rising through the 1980s, 1990s and 2000s to a high of 25% in 2008. 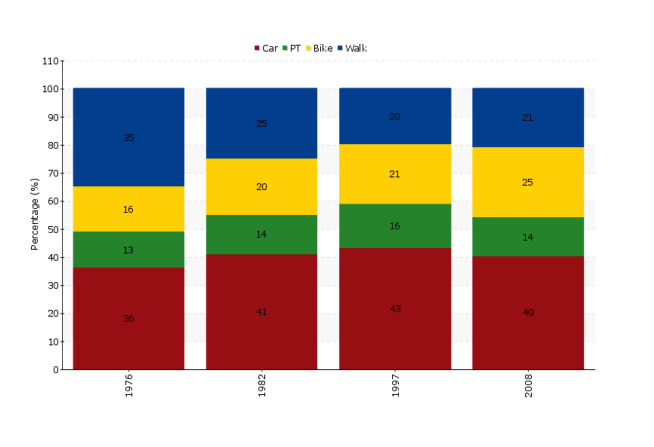 Modern statistics for Bremen are available via the Technical University of Dresden’s ongoing project Mobilität in Städten. After 30 years of growth, these show a drop in cycling’s modal share to 23.4% in 2013. The 2018 study is yet to be published.

What these figures suggest is that Europe’s top three cycling cities all had a major battle on their hands to re-establish cycling. Just like Amsterdam and Copenhagen, Bremen was not always a cycling city. Indeed, if the figures are to be believed, the 1960s domination of the car, and the growth in urban motorways during that decade, nearly killed off the bicycle in Bremen. The turnaround seems to have happened just at the moment when constructing a new motorway at Mozartstasse was stopped in 1973..

Cycling’s subsequent growth in the next 30 years coincided with the birth of the ADFC in Bremen in 1979, as well a rebellious cycling advocate in the Bremen administration, and the building of a number of new separated red cycleways that exist to this day. The results were remarkable, and could be seen as Bremen’s first Verkehrswende.

However, looking more closely at the figures, it is clear that cycling’s re-appearance as a “normal” means of transport was largely carried out at the expense of walking rather than driving. Indeed, car use (and ownership) continued to expand into the 1990s. It is telling that car use continued to grow into the 1980s, and car ownership has grown right up to this day.

But since 2008, little has been achieved. The ceiling of 25% modal share that was hit in 2008 is still, after more than 10 years of talking the talk about a Transport Transition, not been breached. This period of failure – consecutive SPD/Green administrations have claimed to want to see cycling numbers rise – has been marked by a strong advocacy for on-road cycling by both the ADFC and the administration. Cycle Streets have been built with little or no restrictions on motorised traffic beyond a 30kph speed limit that is routinely breached. Marketing of cycling by the administration has included claims that it is safer to use the road.

More recently the tone has changed. The ADFC has begun a push for protected bike lanes, and therefore separation of cyclists and motor vehicles. Criticism of Bremen’s Cycle Street – lite policy is growing. With a new administration about to come into power involving the cycle-friendly Die Linke, a Transport Transition is now a central talking point in coalition negotiations.

This time, however, success will require car use to decrease. Whilst the wave of cycleway construction in the 1980s has succeeded in bringing cycling back into the mobility mainstream in Bremen, this has been achieved parallel to continued growth of car use. Whether Bremen is a Cycling City, a Car City, or both, is a matter of ongoing debate in the administration. Will we see a new wave of cycleway building in Bremen that brings the cycling modal share up to and beyond 30%? And most importantly, in a manner that reduces the number of car trips? We’ll keep you posted.