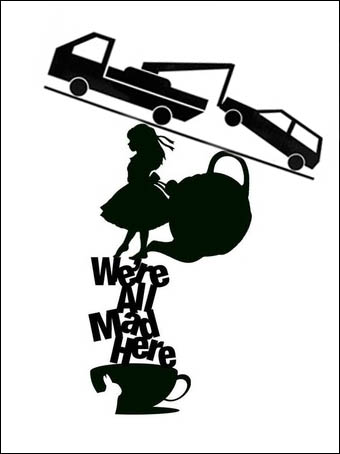 According to Bremen policy documents, this should have been the turning point for the city to finally enforce its stated goals. For example the Transport Development Plan states on page 169:

“Parking bans should be strictly enforced by intensified traffic monitoring to deal with conflicts caused by illegally parked vehicles on footpaths and cyclingways.”

“..in the future the illegal parking will be prevented.”

The action took place on 26th April, when residents took the rare chance – illegal parking on both sides of the street is the norm – to park two cars legally, following a removals van visit to a neighbour. The next day, a police car appeared, its occupants asking the activists to remove their legally parked cars. One was moved, as it protruded a few inches into a junction. But the other stayed.  Within a few hours, it was gone, towed away and impounded in the Bremen Wonderland for Legally Parked Cars. Also known as Abschleppdienst Bremen Woltmershausen. We can be pretty certain that, as we write – and as you read – all the other illegally parked cars in Biebricherstrasse will be sleeping soundly, safe in the knowledge that the law is behind them.