When a cycling city like Bremen, with a cycling modal share of 25%, announces its flagship cycling infrastructure initiative of this parliament, you would expect at least some bold and innovative measures. The name of the flagship policy – Premium Routes – certainly trumpets the idea that these will be even better than the existing, substantial, cycling network.

Details of the first such route, a 43.8km long stretch from Farge in the north-west of Bremen to Mahndorf in the southeast, were announced this week. The headlines made good reading, but the devil is in the detail. Transport Senator Joachim Lohse presented the feasibility study for this route on Wednesday:

Premium Routes will inevitably involve some compromises along the way. This, for example, is a Premium Route in Venlo in the Netherlands.

But to call a cycle route “Premium” when 60% of it is on-road? The hallmark of Copenhagen’s progress in developing its cycle network – the re-purposing of whole motor traffic lanes as separated cycleways – is almost completely absent from the plans. We found just one example, at the corner of two streets, Herdentorsteinweg and Am Wall (on pages 117ff of the study). The refurbishing and broadening of existing, separated cycleways – the real backbone of the cycle network in Bremen – occurs only sporadically, on Steffensweg in Walle and part of the Osterdeich in the eastern suburbs.

The consultants themselves point to a number of problems (known in the jargon as “points with increased clarification requirements”) on the last pages of their study (p. 147f), here only an excerpt:

Thus, for the sake of car parking on Lange Reihe, the quality of the Premium Route is sacrificed. No solution is offered for the reduction of car traffic to Bremen Cycle Street standards, and additional costs are accepted – a clear subsidy of the car. Interestingly, compare this to the text on page 73 for a Cycle Street in Hemelingen: “The possibility of taking the Premium Route through Christernstrasse was discussed with the working group in May 2016 and was regarded by most participants critically. A traffic load of 2,800 cars / day as well as three bus lines in the section west of Brüggewegs makes no Premium Route standard possible.”

We cycled along the eastern half of the proposed route, from Osterdeich to Mahndorf railway station. Here are our observations : 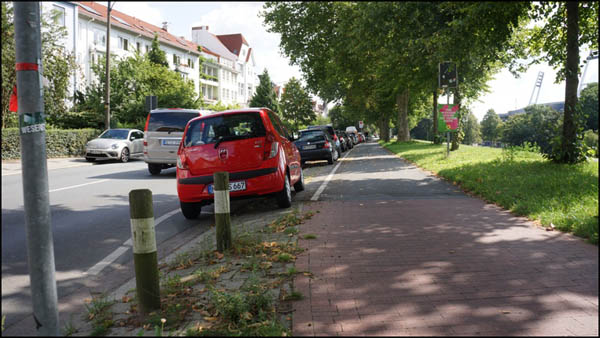 On the Osterdeich between Café Ambiente and the Weserstadion: existing width 2,50. The consultants want to have the cars parked on the road here and broaden the two-way cycle track to 3m (p.124). This meets accepted German standards, though not for a main cycle route. 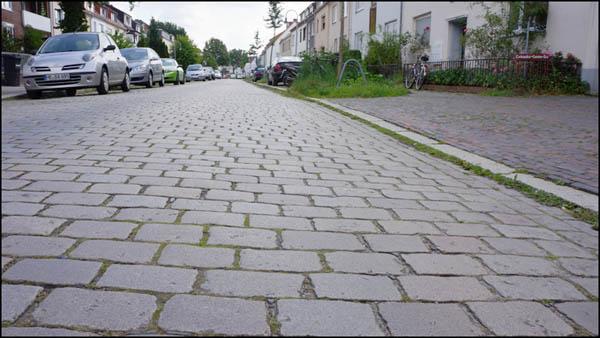 Cobblestones on Ahlringstraße, near Sebaldsbrück station. Most cyclists use the pavement.

Here is the only stretch where a completely independent, green cycle path is to be built: length 370 m, width: 4 m (feasibility study, older version p. 63)…..

Christernstraße (east of Bruggeweg): This is to be converted into a Cycle Street, but why? There are three bus lines (40, 41, 29), and the existing cycle path is completely in order. Even the consultants have their doubts: “The possibility of leading the Premium Route through Christernstraße was discussed with the working group in May 2016 and was seen by most participants critically. A traffic load of 2,800 vehicles / day as well as three bus lines in the section west of Bruggeweg make no Premium Route standards possible. “(Feasibility Study long version, p. 73)  Their suggestion: ” Because of their importance for bus services, these streets are only conditionally compatible with the idea of a Cycle Street. In this respect, the recommendation is to use the existing road, in mixed traffic, for the Premium route.”(Feasibility Study long version, p.88).

And the next problem:

A planned mini-roundabout on the junction of Christernstraße and Bruchweg

This is why. Bus turning on the junction of Christernstraße and Bruchweg.  Right in front of us an intact bike path. So who would want to cycle on the road? The consultants’ opinion: “(A mini roundabout) creates a balance between the interests of cyclists and bus traffic” (Feasibility Study long version, p. 90). 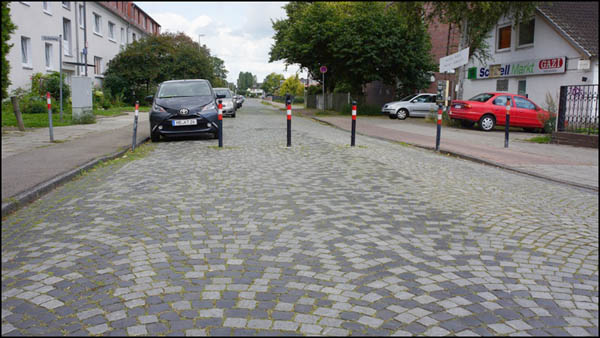 Cobblestones on Osterhop. Aha, here through traffic is interrupted. It can be done!

A crossing will be needed here, on Nauheimer Straße at the corener of Harzer Straße. The route crosses to the other side in the Ortwisch, which in turn is very cyclable. But this is a likely spot where cycling commuters will be slowed. 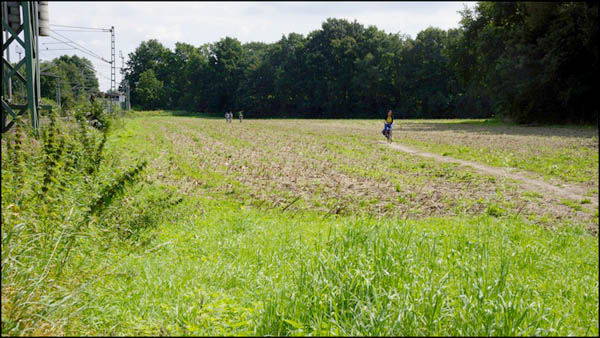 Shortly before Mahndorf railway station the cycle path peters out. It is unclear where the Premium Route will go. Along this field….

…or over this level crossing?

These are just some of the  problems on this route. The high proportion of cobblestone streets, the dismantling of completely intact cycle paths on streets with bus services such as Christernstrasse, and the repeatedly suggested compromises (see, for example, Osterdeich) is striking. And what is quite astounding: 4% of the route without bike infrastructure in mixed traffic with 50 km / h, and a whopping 53% on poor standard Cycle Streets.

The consultants involved have stated clearly why this is the case:”since there is no need for major reconstruction measures when setting up such cycle routes” (page 65) Cycle routes are therefore a cheap solution”. To expect any kind of “premium” quality route on the cheap is patently ridiculous.

But there is a hint of hope: the consultants have fallen far short of the city’s original project budget with their recommendations (see p. 139). The original cost range was € 500,000 to € 1 million per kilometre. The current proposals have been costed at € 415,000 per kilometre. Theoretically, the whole project could have a budget twice as large as now recommended. There is still a lot of financial headroom to improve the route’s quality.

With so much on-road cycling, in reality this is not a Premium Route, but a route for aspiring Vehicular Cyclists, a concept that has been abandoned by successful cycling nations and cities for decades. But amongst Bremen’s administration. politicians and even advisers who should know better, it is rife. Perhaps this is due to genuine belief – there is a surprising lack of knowledge in Bremen of the various English-language debates around vehicular cycling – or expediency, as removing cycle tracks conveniently creates more space for car parking. However, pleading state poverty is certainly NOT an option here. The original budget is twice the cost of the current proposals. And digging up whole cobblestone streets rather than widening existing cycle tracks is inherently more expensive – the asphalting of Lange Reihe alone has been costed at € 1.2m .  Either way, this in part explains why the bike rate has been stagnating here for more than 20 years.

Calling this proposal a Premium Route adds another term to the 1984-inspired Bremen dictionary of New-speak.  If a Bremen Cycle Street is (un)good, a Bremen Premium Route is surely doubleplus(-un)good. It is then a simple job for the administration’s Press Department to remove the items in brackets and sell the idea as a good news story to the local media.