The first thing you notice in Amsterdam’s inner city is that there are significantly fewer cars there than in Bremen – fewer cars on the roads and fewer parked cars. The latter appears to be the main reason for the lower number of cars in the city generally. Available car parking in the city is comprehensively are managed. 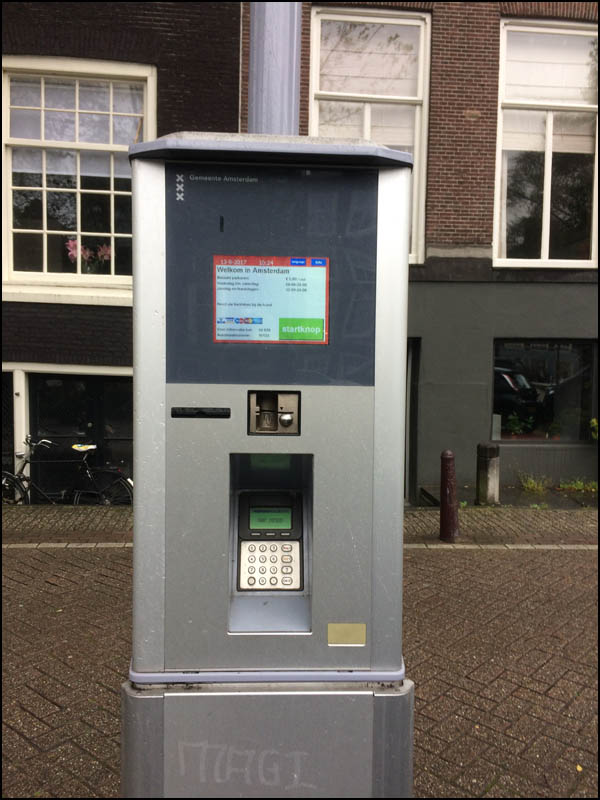 I saw no free parking, but a lot of managed residents parking. In many streets there are simply no parking spaces. Thus numerous small streets can only be used by pedestrians and cyclists. Bollards – often retractable – prevent the entry of cars. The wider streets are mostly divided three ways. In the middle is the tram, right and left are equal width tracks for cars and bicycles. 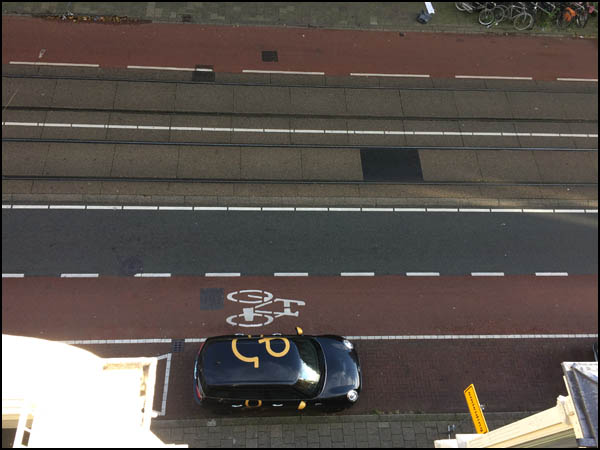 Cyclists outnumber all other traffic in Amsterdam. In streets with motor traffic, there are generally red-asphalted cycle lanes, equal or wider than the car lane. I saw protected cycleways less frequently. 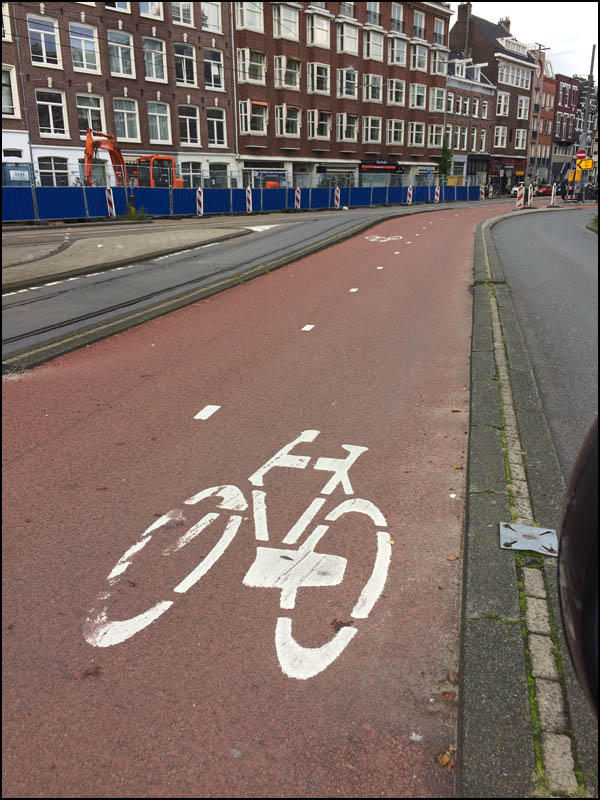 Amsterdam drivers drive much more defensively than those in Bremen. Overall, the traffic is more relaxed. During my stay, I never came across aggressive drivers hassling others. It was striking that there were traffic lights as well as zebra stripes on almost every street crossing. In Bremen this is not allowed under our planning laws. 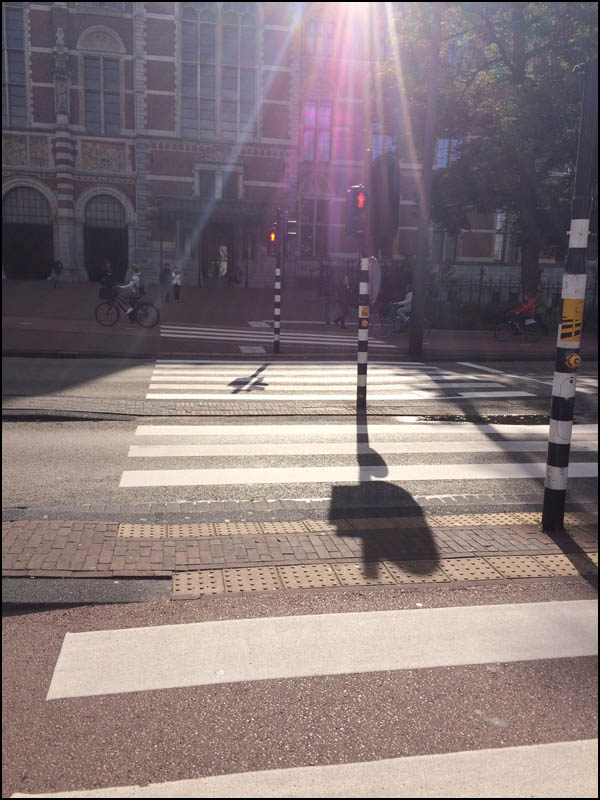 One problem I did spot was the high number of motor scooters. They drive relatively quickly, mostly on the cycleways.

While motor and cycle traffic have been generally well catered for, pedestrians are comparatively  poorly served in Amsterdam. The pavements are usually very narrow and are frequently blocked by parked cycles, scooters, rubbish bags and illegally parked cars, making walking in the city a challenge, often requiring walking on the road. 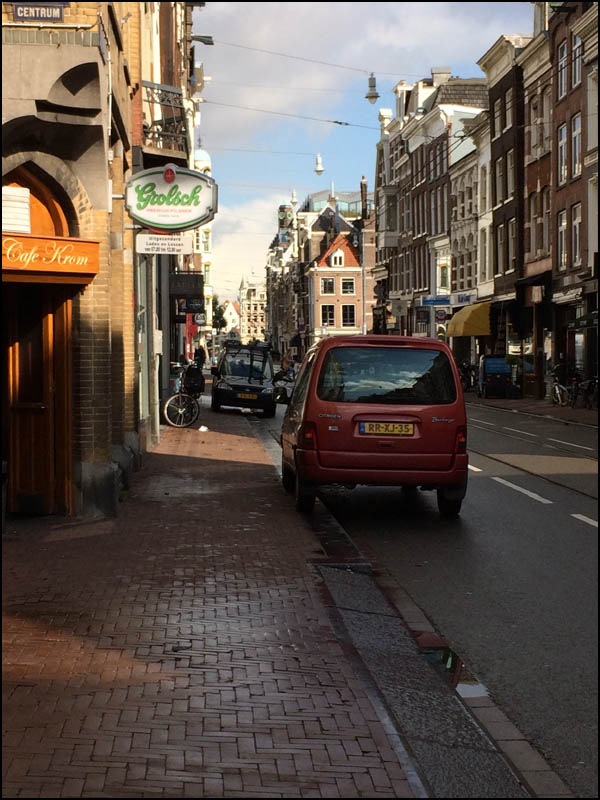 There also seems to be insufficient, secure cycle parking spaces. On the other hand, you do not see as many high-quality bicycles as in Bremen. Red lights are also often ignored by cyclists in Amsterdam. This becomes particularly unpleasant at crossroads, where several cycle paths come from different directions and as a pedestrian you are constantly in danger of colliding with a bicycle. 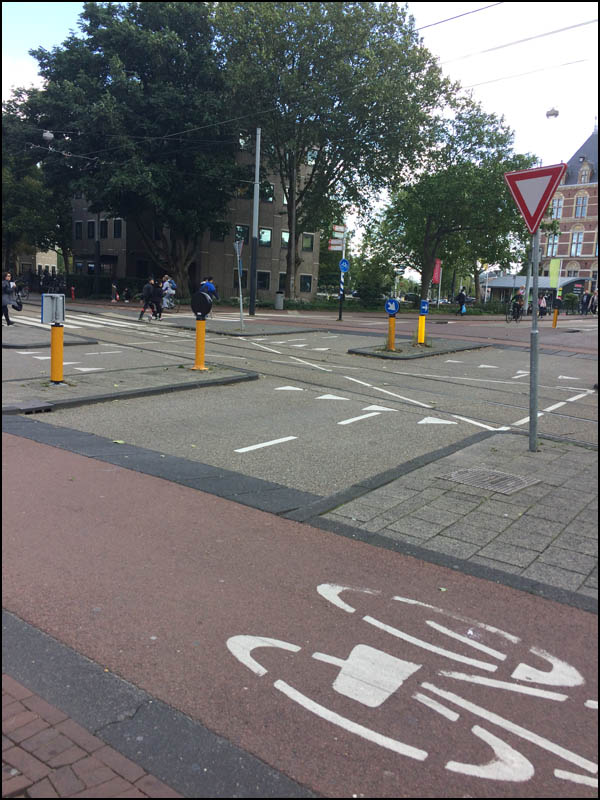 At road junctions without traffic lights, cyclists typically pedal on through without looking, so you have to be very careful. As a cyclist you certainly need a pay attention. When it’s the dark, around 90% of cyclists have no lights. I have never felt so unsafe as a pedestrian as in Amsterdam. There is a dense network of trams and buses. In every tram, a worker sits in a small compartment that sells tickets and answers questions. This is very customer-friendly, but certainly very cost-intensive. A ticket costs € 2.90. With it you can travel for an hour, using multiple trams and buses if you wish. 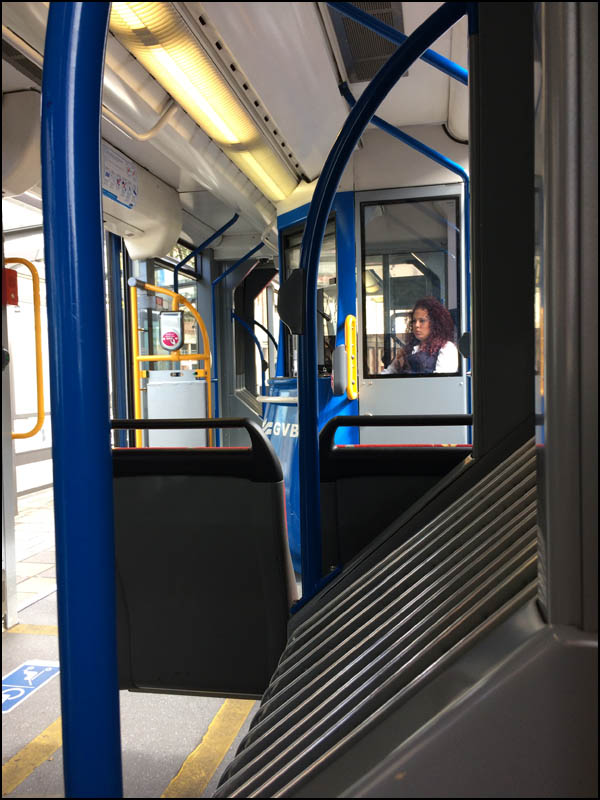 My conclusion: Amsterdam has a more balanced distribution of space between cyclists and motorists. Comprehensive parking space management. The best means of transport is the bicycle. For pedestrians, though conditions are poor. The redistribution of road space in favour of cyclists was also done at the expense of the city’s pedestrians.

3 thoughts on “A Visit to Amsterdam”