The Friedrich-Ebert-Strasse in the Neustadt district of Bremen is heavily congested, or better said: a four-lane traffic hell.  People who live on this road are exposed to unbearable levels of noise and air pollution every day. Because this road – 30 m wide, then 60 m wide before it turns into the Wilhelm-Kaisen-Bridge – offers generous space for motorized traffic. Pedestrians and cyclists, on the other hand, have to share the narrow (4 m) sidewalk, and can hardly ever cross the road safely.

Should this be the case? Is this appropriate for a modern urban environment?

We believe it is not. We wanted to show that there is another way to organize public space.

Here is one participant’s report:

Months ago, this campaign was planned by the Bremen Alliance for Transport Transition, and a permit for the demonstration was applied for. A lane on a section of Friedrich-Ebert-Strasse would be closed to cars, and parking would be suspended for that block.

On the car lane, which would be converted into a Protected Bike Lane, cyclists could experience how beautiful it is to ride on the road without cars instead of on the narrow cycle path next to the pavement.

Pedestrians could enjoy the full pavement width of 4m (cycle path and footpath) without having to watch out for cycle traffic. Everyone would have an opportunity to use the parking spaces for meaningful activities.

Car traffic, tram and bus traffic continued to make the street as loud as it normally is. But you could see from the happy faces of the cyclists that our plan worked. 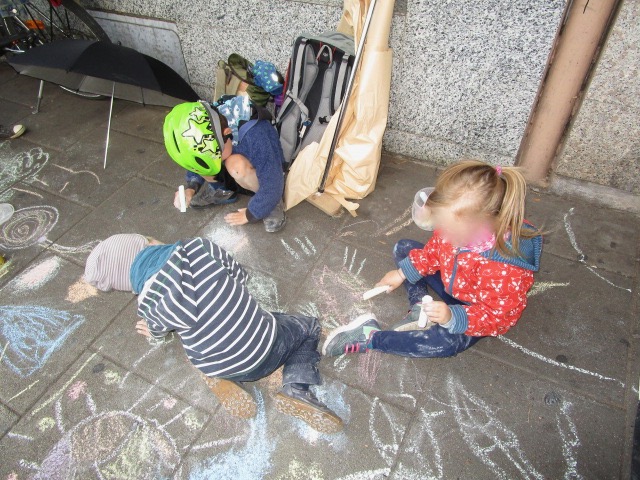 Pedestrians were happy to have more space to move freely, and children covered the sidewalk with chalk.

The parking spaces were freed from parked cars so there was space for other uses. Environmental organisations, Cambio Carsharing and other groups put a lot of fantasy and energy into to their stalls and installations, distributed information and held discussions. One group of girls sat on a blanket, others made themselves comfortable on camping chairs.

Delicious espresso was on offer, made with Fair Trade coffee transported by sailboat.

Listeners of an actor from the Bremen Shakespeare Company, who read a 1930 story by Sebastian Haffner on the subject of pedestrians, could take a seat on a sofa in the parking strip. A band performed and attracted many passers-by until the end of this action.

Fortunately, the city had approved this action, so the police were there to keep order. But of course not every driver liked this action. There were traffic jams and sometimes anger, also with the bus drivers, but there were no accidents.

At the end, activists (from FUSS e.V., ADFC, BUND, and VCD) removed the separators for the “Protected Bike Lane”, scrubbed off the bicycle symbols from the lane,

rolled up the fabric zebra crossing, and left everything as it had been before.

Or was it really as before?

Will anything change after this event?

This afternoon showed how much people enjoy using public space to sit, stroll, and talk to each other. The retailers on this section of the street also welcomed the action. Residents leaned out of the windows and watched from above with interest.

The organisers hope that something will move in the minds of the general public about their own climate-friendly behaviour. Some people will, hopefully, ask themselves why the city has not redistributed public space in favour of cycling and walking before.

We hope that this action will contribute to a redesign of Friedrich-Ebert-Strasse and – eventually – less car traffic and more space for cyclists and pedestrians.

1 thought on “Parking Day: Or how to civilise a traffic hell  ”