We like Bremen and chose to make it our home

Like many families, my partner and I chose to raise our children in Bremen because we enjoy the quality of life here.  Like the San Francisco Bay Area where I grew up, Bremen is multicultural, progressive, and openminded.  Unlike most of the United States, however, it is still relatively affordable for working families.

We work hard.  We pay our taxes.  We respect others in public spaces and teach our children to do the same.  I even teach my children to pick up trash they find on the playground.  Although I am not a German citizen and cannot vote here, I am grateful for the opportunity to raise my children with a better quality of life than they would have in the USA where I come from.  And I appreciate the fundamental sense of solidarity and consensus that governs daily life in Germany.

That’s where illegal parking comes in. 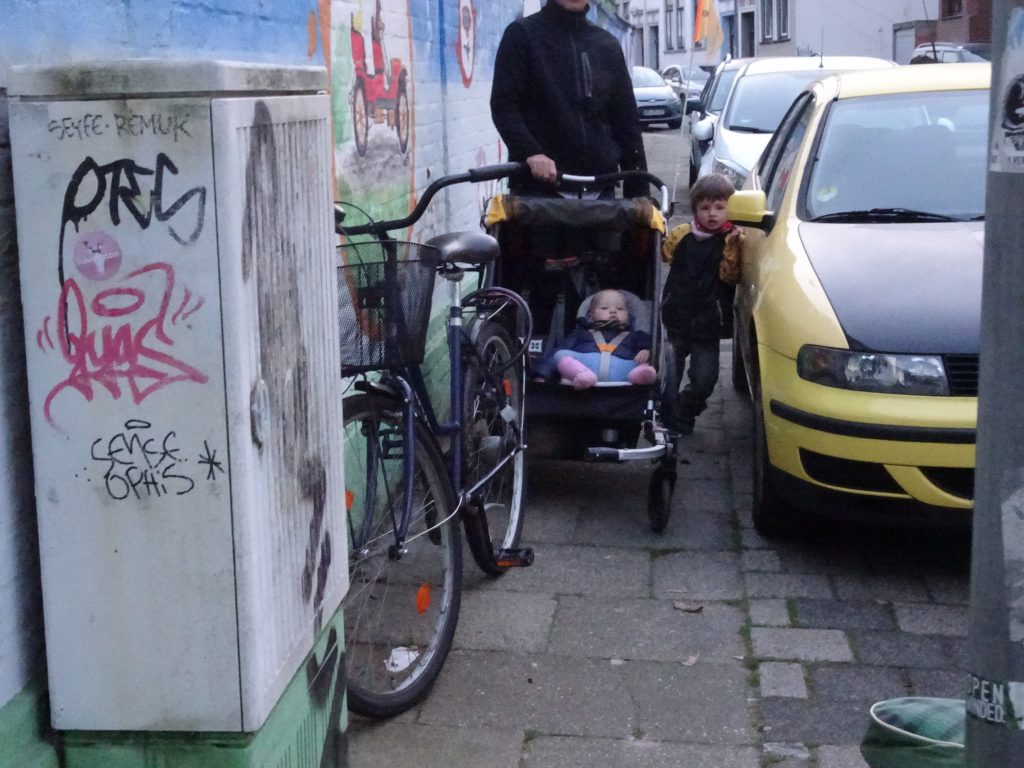 When my daughter was born, I couldn’t bike with her until she could hold her head enough to sit in the special baby seat in our bike trailer, so I walked a lot both wearing and pushing her, and was often confronted with sidewalks too narrow for a baby carriage.  The sidewalks themselves were fine; it was the cars parked with half their wheels on the sidewalk that made me unable to walk down the street with my baby, especially on garbage day.

In Germany, the vehicle code requires that sidewalks be 2 meters wide to accommodate baby carriages, wheelchairs, walkers, or simply two people holding hands.  Yet here in the Neustadt, most sidewalks are too narrow, because cars are parked on them!

Often I cannot walk to preschool, or to the grocery store or the tram stop holding hands with my children, because privately owned cars are parked on the narrow strip of public space (the sidewalk) intended for our use.

Nothing is being done

I was frankly shocked to learn how many illegally parked private automobiles are never ticketed or towed here as they would be pretty much everywhere else in the world.  Here in the Neustadt, drivers regularly park on the sidewalk (so-called “Aufgesetzes Parken”, which is technically illegal, though tolerated), often blocking pedestrians’ safe passage, impairing visibility at intersections especially for children, and parking on or wheelchair ramps, is something the authorities here are fully aware of, yet allow. 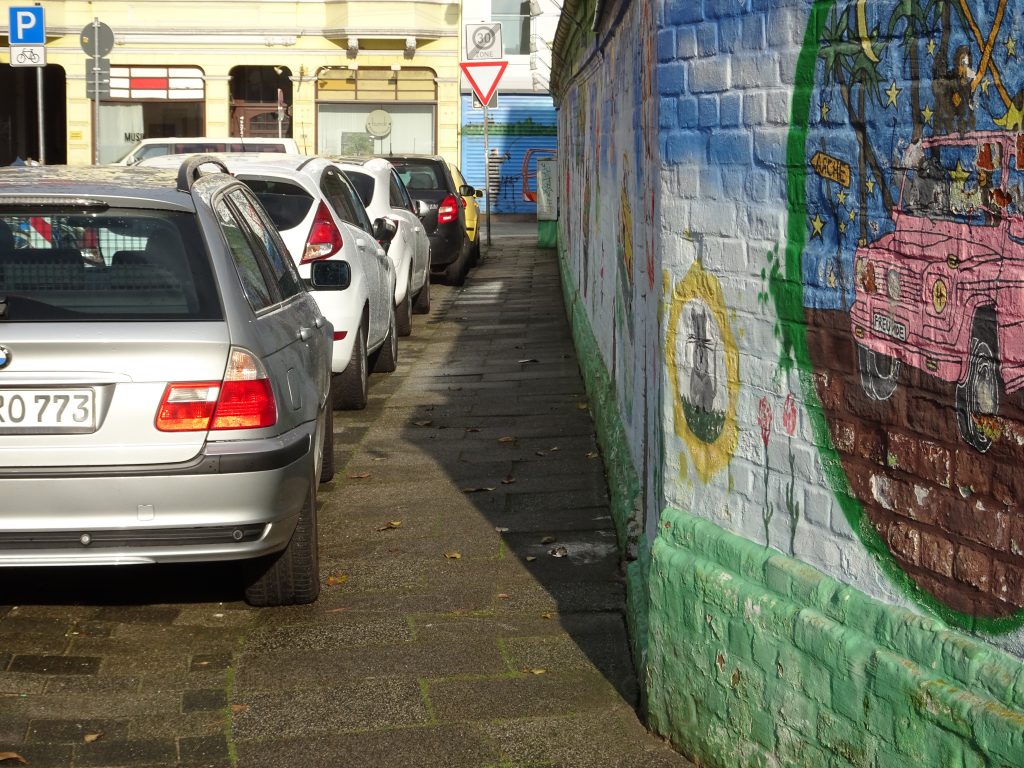 Neighbors from the other side of the Neustadt, closer to Bremen’s airport, have reported cars sitting idle for weeks on their streets sidewalks while their owners are on vacation.  In the side streets parallel to the #6 tram line to the airport, out-of-towners can park for free, wheel their luggage around the corner, take the tram to the airport, and enjoy a vacation in the sun – while their vehicle sits unused in front of someone else’s house, often parked on the sidewalk where it blocks pedestrians’ safe passage.  A house was condemned right around the corner from my house and, years later, the owner’s car and motorcycle languish undriven, weeds growing under them.  If parking spots are such a premium, why aren’t they ticketed and towed?

My son is now learning to ride his “big boy bike” and required by law to ride on the sidewalk, as am I when I accompany him.  Yet in the Brinkumer Strasse, leading to his preschool, he cannot safely navigate the narrow space left for him by cars parked on the sidewalk, so he regularly has to ride on the street, something that does not feel safe to me, his mom.  Yet with all the public, paved spaces in our neighbourhood being occupied by private automobiles, what choice do I have? 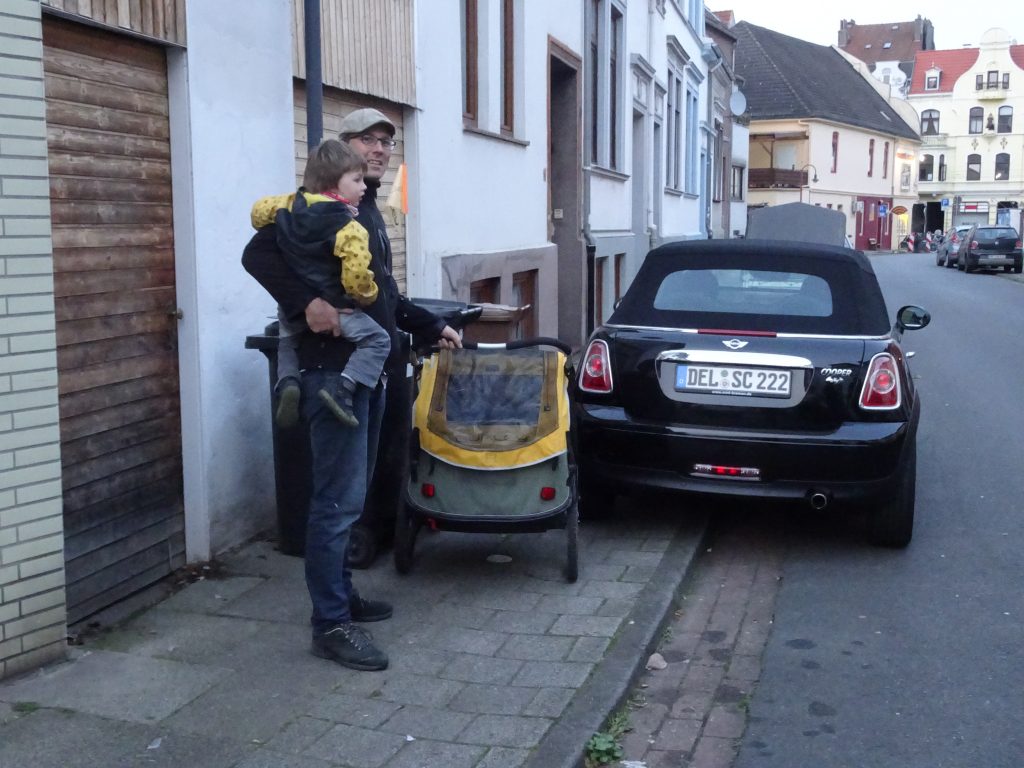 I started researching what is going on and quickly found out that there are two types of illegal parking here in Bremen:  drivers parking on the sidewalk or on wheelchair ramps, or within 5 meters of an intersection, because they don’t know that it is actually illegal (though I ask myself why they did not have to learn this in order to get a license?  That kind of knowledge was certainly mandatory in California, USA; where I learned to drive!)

The second type of illegal parking is much more insidious.  This is the “I’ll just be a moment” or “just going to the bakery really quickly” attitude drivers have when parking on sidewalks, bike paths, corners or wheelchair ramps.  Here, the driver feels her or his needs to be paramount to those of others, including wheelchair users or parents with babies, or children learning to ride bikes.  These type of lawbreakers, in putting their needs first, represent exactly what is wrong with the transportation “system” – individual “convenience” is put above and beyond neighbourliness or the real needs of a dense, diverse city – instead individual motorized traffic is paramount.

Many delivery vehicles also belong to the category of “I’ll just be a minute” lawbreakers:  because of a lack of “loading zones” (I have never seen such a thing in Germany, at least not here in Bremen) businesses, but also the increasing number of private individuals receiving packages (ordering goods online!) rely on fast delivery;  these businesses often pay their employees per delivery, requiring them to break the law in order to “just quickly” deliver a package.  This extra motorized traffic not only clogs our narrow streets (see picture) but further blocks the safe passage of pedestrians.  A good example of one possible solution for deliveries in dense cities can be seen in Ghent:

It may not seem dangerous, but the “custom” of parking on the sidewalk in Bremen (which I, like many people, actually thought was legal here!) is just the first step on a slippery slope of illegal behavior which not only further endangers the most vulnerable members of society, but also encourages car drivers to break the law.

Furthermore, it shows that Bremen’s authorities and decision makers do not respect the rule of the law.

It’s not a victimless crime

Once the police or parking authorities decide to ignore the so-called “victimless crime” of parking on the sidewalk, it’s easier for them to ignore cars parked in intersections, blocking emergency vehicles.  Cars parked on sidewalks, wheelchair ramps, on bike lanes, and wherever the driver thinks it’s “convenient” remain for days and weeks, until the driver “gets around to” moving them. 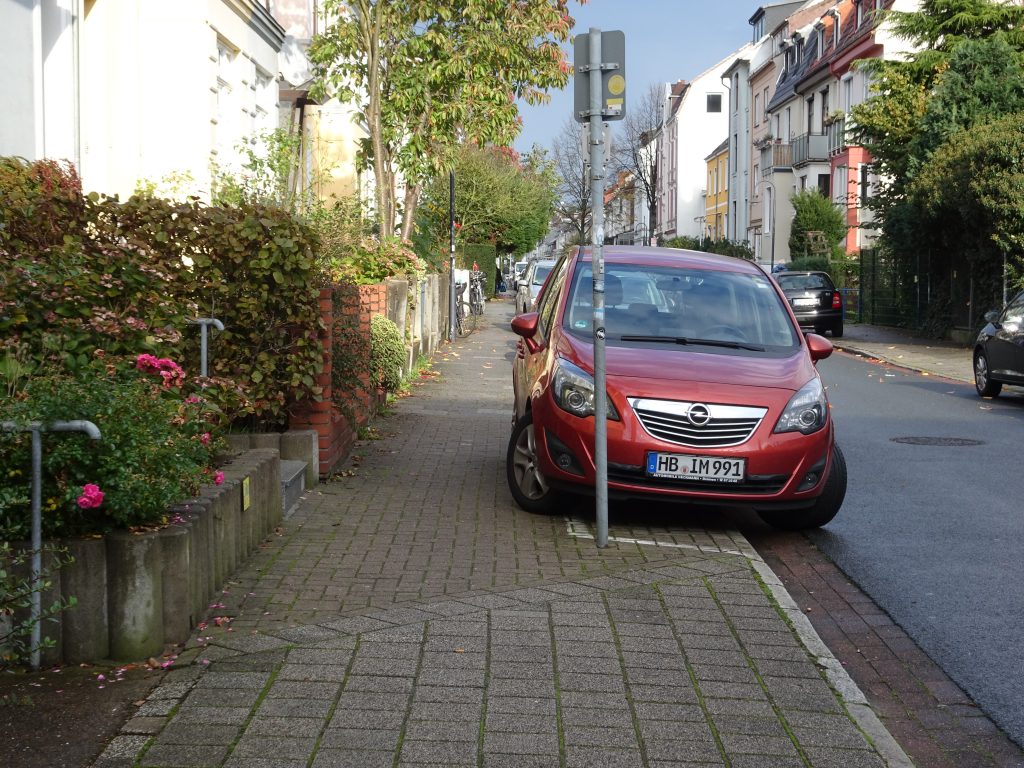 Efficient parking control isn’t a utopian idea:  where I come from, even half a rear wheel blocking a ramp or driveway means the car will be towed at the owner’s expense.  When this happened to my girlfriend in 1998, in the Capitol Hill neighborhood in Seattle, she had to pay $400.00 up front in order to retrieve her car;  I would imagine the fees are considerably higher now.

Convenience instead of common sense or social justice

Cars are convenient.  Parking them right in front of your front door is, too.  But it is exactly this convenience that is killing our planet.

Throughout the industrialized world, a great deal of public space is occupied by private motor vehicles.  The roads belong to the state, that is, to taxpayers, as do the sidewalks full of parked cars!

Is car travel so sacred to decision-makers in Bremen that they are willing to look away while private automobiles randomly block spaces designated for pedestrians?

For able-bodied humans (obviously wheelchair users, parents with babies, and other vulnerable citizens need special treatment) walking a few meters to your car – presuming you really do have to use one at all – should not be seen as a burden.  Loading zones, electric bike deliveries, more small local businesses – there are many creative and flexible options to make our cities more walked and more walkable, and to reclaim public space for humans instead of cars.

But I am left asking myself why on earth Bremen would show such blatant disrespect for its most vulnerable citizens?

Is the right to free parking “at any cost”, so sacrosanct that Bremen chooses to turn a blind eye to the dangers it represents, especially for children or the mobility-impaired?

Many believe that small businesses benefit from this “free” parking, though studies show time and time again that business districts which choose pedestrian and bicycle traffic over private automobiles get more customers.

The solution is simple

Parking management, as in other cities of this size, would be an easy way for Bremen to create additional public income and solve the problem.  Furthermore it would demonstrate that politicians and decisionmakers actually respect the rule of law.

Because Bremen’s government chooses to permit illegal, antisocial, and dangerous behaviour, for no sensible reason at all except preserving the status quo, we neighbors, parents, people who  walk or bike (statistically, this includes almost everyone!), wheelchair or walker users, and people who simply enjoy living in a culturally rich, friendly, dense,  openminded, progressive city need to force change.

Talk with your neighbors, colleagues, and friends.  Call the Bürgertelefon (361-0) and ask why this is permitted.  Report illegal behavior to the authorities,  doing so in Berlin has led to the authorities actually doing something about it.

12 thoughts on “Illegal Parking in Bremen:  Not a Victimless Crime”