An agitated lady stands at the Busestraße tram stop. “I have to take risks just to get to the bus stop”, she says. She pushes her rollator along the footpath and cycle path between the densely parked cars, lightly touches a vehicle door and daringly steps on to the road. A vehicle in front of her is already racing along the road. Her view is completely blocked. She yanks back her rollator in shock, which unfortunately has no magic eyes to tell her if the road is clear.

A vehicle parked on the protective strip between road and cycle path, a sanitation company, has gotten hold of a “weekend parking lot” here on the pedestrian and cycle path area and enjoys it under the eyes of a lethargic authority, not to mention the police. 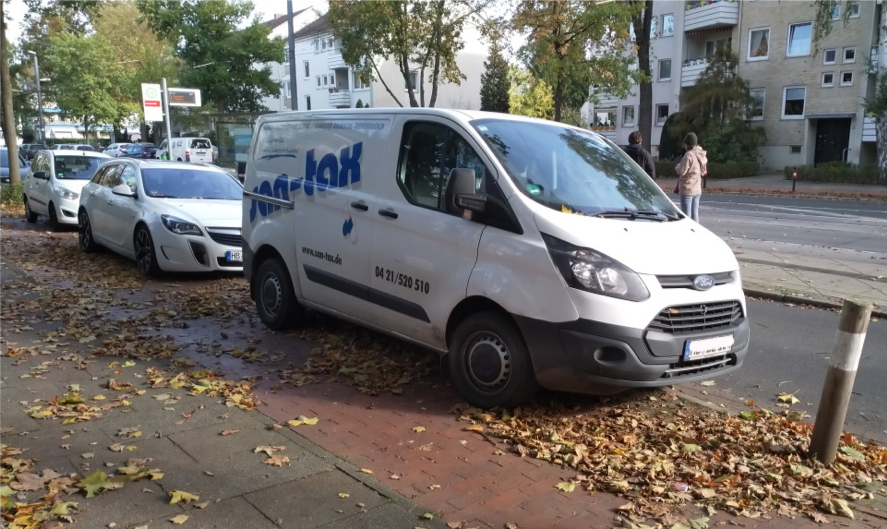 But the offender is not alone. A considerable number of parking offenders have been supporting him for years, in disregard of the relevant traffic regulations .- Has the authority failed in its duties due to a lack of traffic monitoring? Consistent traffic monitoring here is essential, with regular speeding traffic.

The rubbish collection service painstakingly searches for a way to its trucks with the large rubbish containers, between the narrowly parked parking cars. A tanker truck brakes abruptly due to poor parking that severely narrows the road, turns sharply on to the tram rails, as the driver decides to illegally continue on the tram lane. 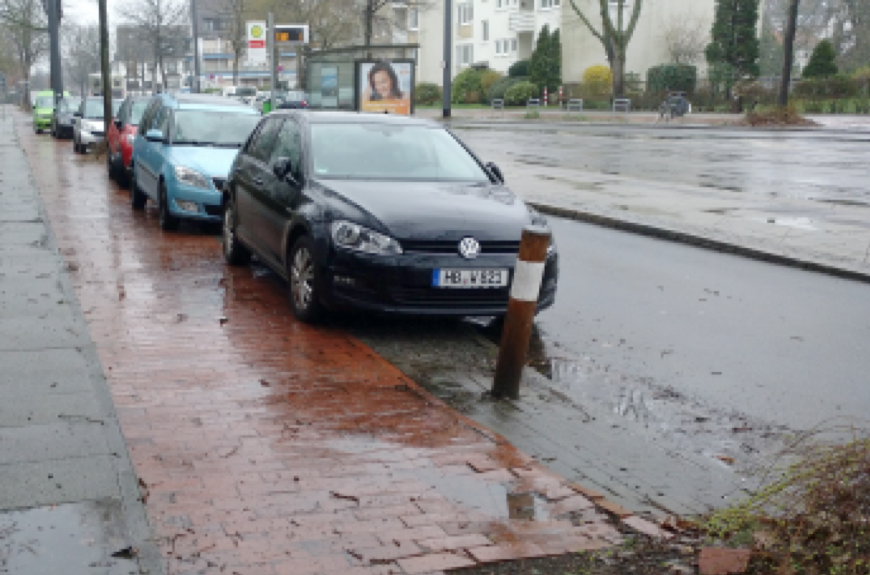 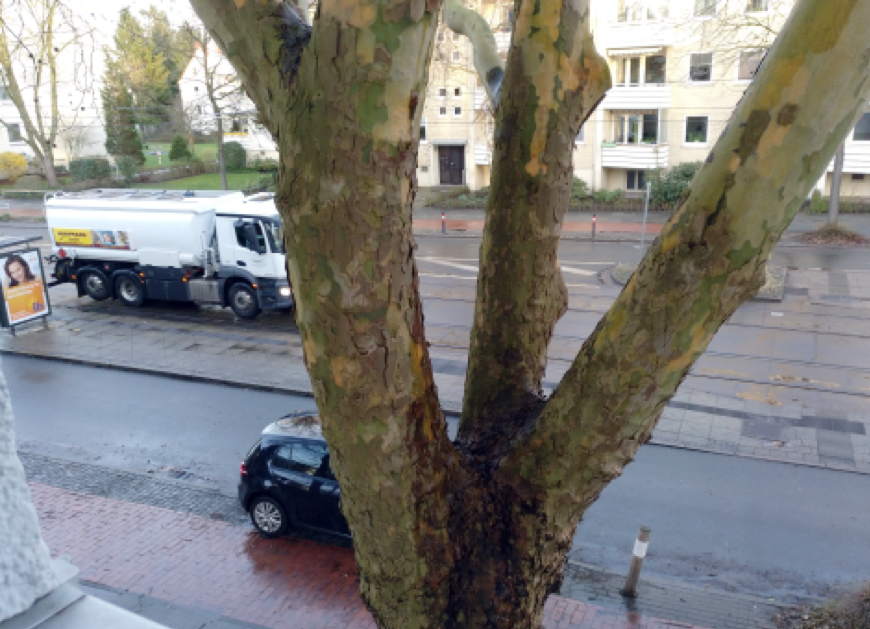 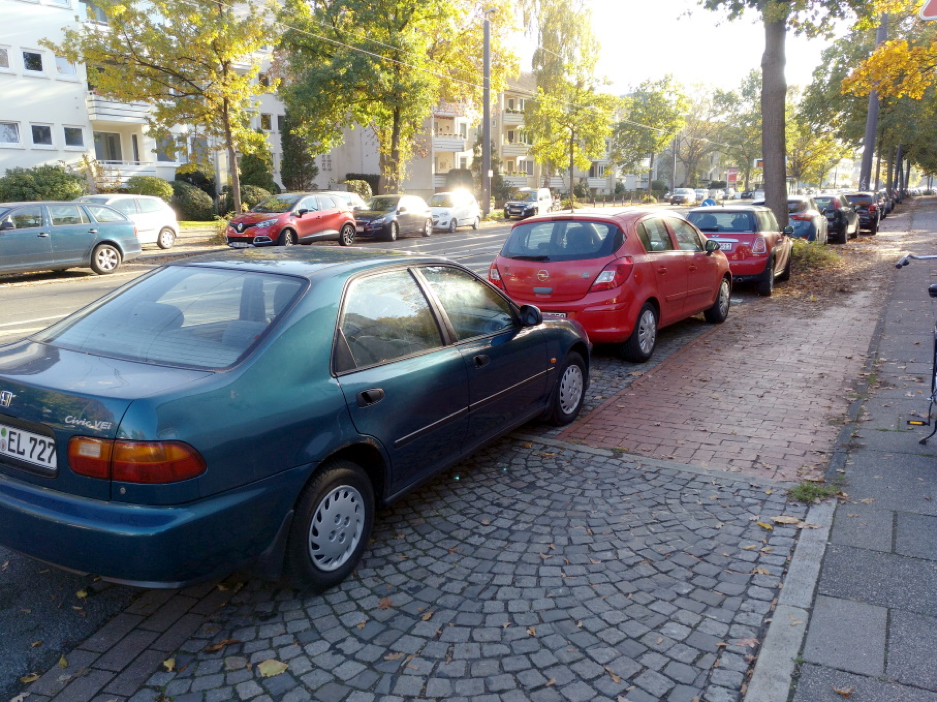 A rubbish truck is heading into town. The driver avoids the road because a wrongly parked vehicle blocks the regular lane. The driver instead moves towards the waiting area of the bus stop and drives over the pedestrian area, endangering waiting passengers, including children and people with reduced mobility. The tram lane here is regularly used – illegally – as an “overtaking lane”, which poses a further hazard to pedestrians at the stop. 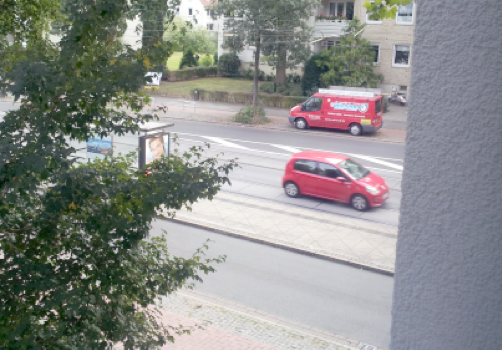 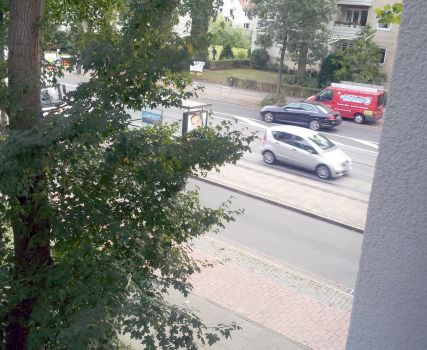 Cars drive through the tram lane in a forbidden manner (Photo: Bernd Thomsen)

Schwachhausen’s local council “Beirat” addresses the issue in May this year (protocol no. 31 (2015-2019) unanimously approving the citizens’ application of the “initiative car-free footpaths and cycle paths” as a resolution proposal and sets the ball rolling with a test order to the ASV (office for roads and traffic). The ASV is asked to check whether accessibility at the stop can be guaranteed by structural changes – Crüsemannallee is also listed in Bremen’s register of school routes. The Beirat members cannot and do not want to ignore this.

The ASV does not oppose the Beirat’s decision regarding structural changes in this critical area and confirms this on 23.7.2019. An estimate of costs is attached. However, the ASV has not sufficiently examined the extent to which structural changes can also be made to prevent dangerous double parking at the end of the stop. There is no justification for this omission, which is why the initiative followed up on 22.10.2019, but has not yet received an answer. 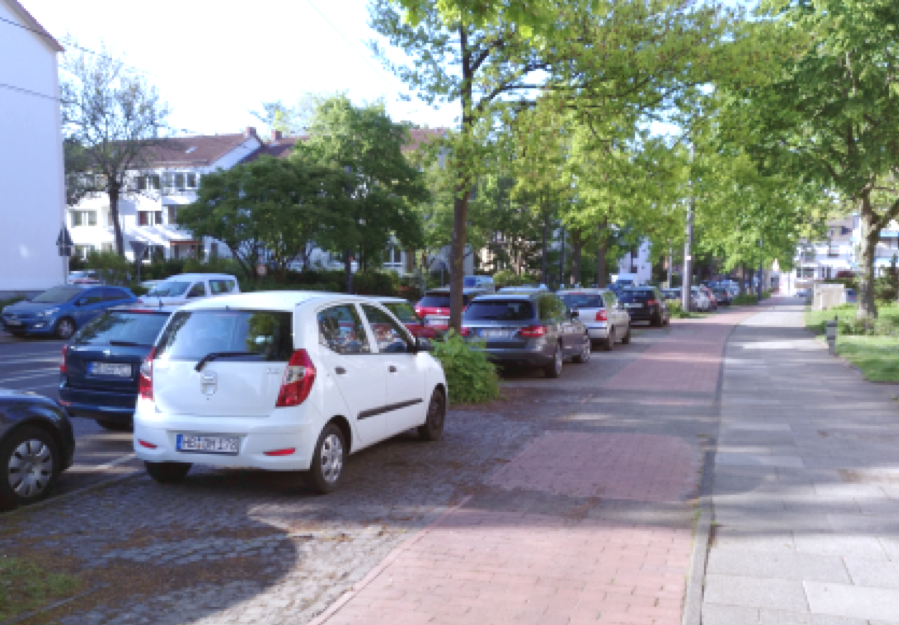 Double parking on Crüsemannallee outside house no. 39/41 (Photo: Bernd Thomsen)

At the same time, the Beirat’s Transport Committee unanimously adopts the following construction measure on 5.11.2019: Bollards will be placed on the protective strip at the Busestraße stop. Accessibility is restored and a high risk potential is eliminated. This unanimous vote is thus regarded as a resolution of the Schwachhausen Beirat. The initiative expresses its sincere thanks to all members of the Advisory Board.
It is now November 2019, winter is approaching, and the citizens’ initiative is looking forward to the swift implementation of the request. Or will the unacceptable situation last even longer? Let us think once again of the lady with her rollator, of the schoolchildren who are repeatedly pushed off the cycle path, the trees damaged by parked cars. There is hope. Bremen’s new coalition government is committed to addressing the issue. Its agreement reads:

Traffic planning is too often still based on cars. The current division of traffic space is pushing weaker road users to the edge of roads and streets.

We will rigorously address illegal parking, especially at junctions. We want to reverse the practice of parking anywhere, and will seek talks with the Beirats to achieve this. Residents’ parking should also be included in this. This is the only way for people with prams, rollators and wheelchairs to move safely and barrier-free, for waste collection and rescue vehicles to get through the streets without obstacles.” 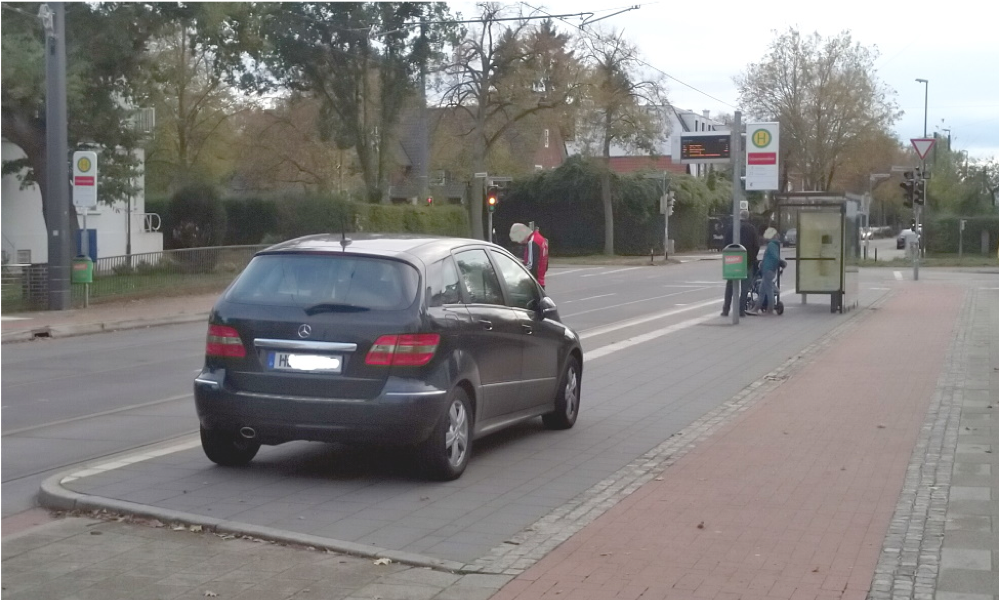 Once the last square metre of cycle paths and pavements is parked on, motorists start to park on the waiting areas, as a parking vehicle at the Crüsemannallee bus stop shows. Another “parking-friendly” idea for residents is to chop down a few trees in favour of parking spaces. In Bremen, an increase in the number of motor vehicles is currently predicted by research institutes close to the automotive industry. Perhaps the only solution is to get out the chainsaw. The Minister of Finance, laughing on the sidelines as citizens argue over public space, would certainly be pleased about the rising contributions from motor vehicle tax.