Following a television documentary about the “do it yourself” and bicycle culture in Portland, Oregon, last year, many Bremers, and especially cyclists, asked me if Portland is really as cool as all the hype. 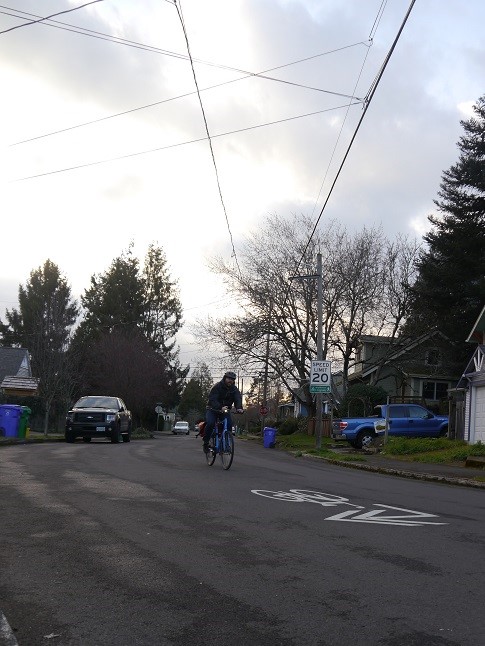 My answer was yes, and no.

Portland certainly does have a lot going for it: more food carts per capita than any other US city, lots of creative local business, an Urban Growth Boundary and investment in sustainable infrastructure, and an overall culture of groovy friendliness (which existed before marijuana was legalized, I promise!).

A committed minority of cycle commuters

What Portland also has is a committed minority of cycle commuters (but, per capita, not really that many more than in other US cities). In a land shaped by volcanic activity, these fit beings climb hills much faster than I ever could (one reason my career as a bicycle messenger in even-hillier Seattle didn’t last long), but what struck me most on this visit, coming from Europe, was how “functional” they were – decked out in spandex, visibility gear, helmets (usually equipped with a bright headlight) they seemed alienating, unfriendly. Rarely did I – in civilian clothing as I am used to biking in in (flat!) Bremen – get even a military-style nod from one of these beings.

A look at Portland’s infrastructure explains quite a bit.

Although many bike routes are on quiet side streets, crossing the main arteries is more problematic: even in “polite, kind Portland” maybe 1 in 4 cars stopped to let me cross where there was no official bike crossing. (This experience was notably different as a pedestrian, and even more so with children in tow) On the side streets themselves, the signage as well as relatively new speed limits of 20 mph, this being part of the “Vision Zero” campaign that Portland has committed to.

Signage is good, with distances given in both miles and minutes (I found the times given to be accurate, but I am in pretty good shape). This made it easy to bike from the Laurelhurst neighbourhood where my parents live to my conference at the University downtown, as well as to bike to addresses I hadn’t visited before. 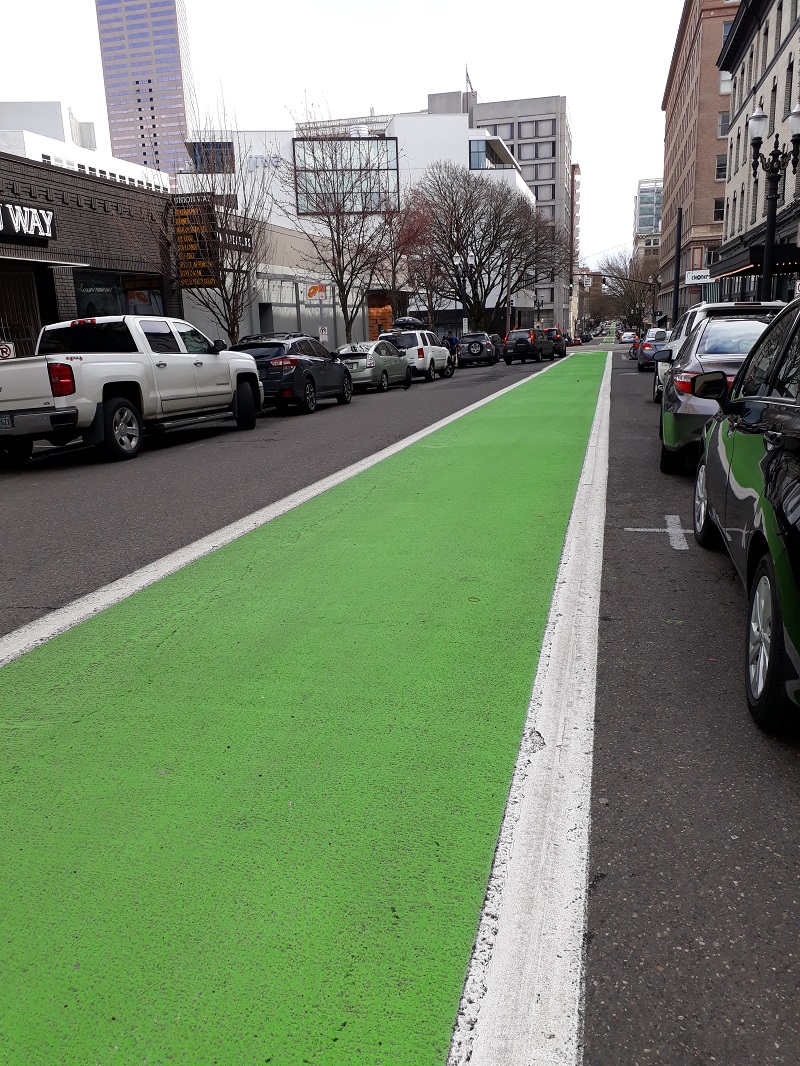 Most bike lanes are still on-street

But all bike lanes – whether striped with paint as in downtown, or “cycle streets” in residential neighborhoods – are still on-street, most with no separation from motor vehicles.

This requires a certain level of mental fitness and attention that the experienced cyclists decked out in Lycra I saw are mostly capable of maintaining, but certainly does not make it easy for small children, older people, or anyone who is not fully confident to decide to leave their car at home and use the bike. Or simply someone who really only wants to get from A to B without much stress, or having to exhaustively rely on cognitive brainpowers or a sixth sense-based second-guessing, interpreting and anticipating of others’ reactions – cycling simply is stressful, and often not comfortable.

And that is the biggest advantage Bremen has over Portland: bicycling here in Bremen is an everyday activity.

The majority of citizens within Bremen – and not a few rural and suburban dwellers too – think nothing of using their bike to shop, to ride to the city center, even to go out to a party or a club (unlike in Portland, there’s no need for a designated driver here). This not only applies to teenagers but even to older folks, many of whom are now investing in E-bikes so that they can be “mobile” – here people understand mobility not as the “convenience” of having a car parked right in front of their houses, but as being able to bike short distances for everyday errands. Walking and taking transit for daily trips is also much more common than in Portland, not to mention anywhere else in the USA, though I also experience a lot of rush hour bus commuters during rush hour in Portland.

As a parent the dangers of motorized traffic are clearer

Since becoming a parent, I’ve become much more aware of the dangers of cycling with motorized traffic, and of the fact, often forgotten even here in Bremen, that many potential, less confident cyclists can’t bike on the road, and that not a few experienced cyclists, like myself, would rather cycle separate from motor vehicles, especially in a town, state, and country where speed limits are still higher than in other industrialized nations.

Bremen has many protected bike lanes

Here Bremen has a lot of advantages over Portland, in that there are many stretches of roadway which do in fact have separated, protected bike lanes, even if these sometimes end suddenly; here, Bremen would do well to learn from Portland in creating a more user-friendly network of well-signed, uninterrupted, off-roadway paths for those citizens who would choose to bike if they knew they would be safe from traffic. 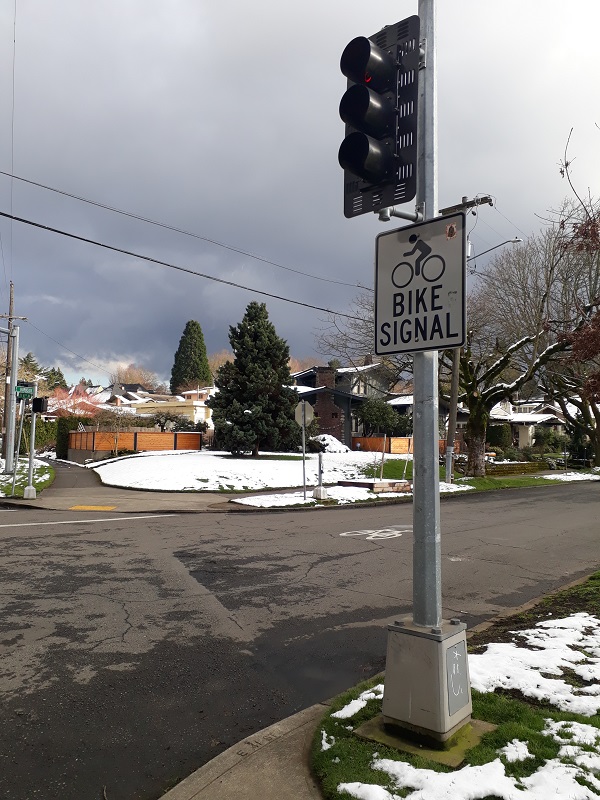 One of Portland’s on-demand bicycle traffic signals; a single cyclist can push the button and stop 4 lanes of traffic on Burnside, a major thoroughfare.

Portland’s city planners and decision makers, despite the “vehicular” character of cycling infrastructure, have made it clear that they take cycling seriously, at least for the “middle aged men in Lycra” demographic group. Portland needs to rethink its target groups and aim at getting, for example, my 11 year old niece and her friends on their bikes too.

Bremen officials seem to be confused

And Bremen officials seem in a confused state too. If road engineers, planners, and politicians were indeed to take their own transport policy (“Verkehrsentwicklungsplan,” or VEP), seriously and increase the modal share for cycling, they must take the actual transportation needs of Bremen’s citizens into account. Rather than simply “moving (motorized) traffic” as quickly as possible over greater and greater distances, they would find that there are countless “good practice” examples and much relevant research available from all around the world, and might even realize the advantages Bremen has, even when compared to a self-anointed “cycle city” like Portland, Oregon.